4 Types of Eagles in Florida 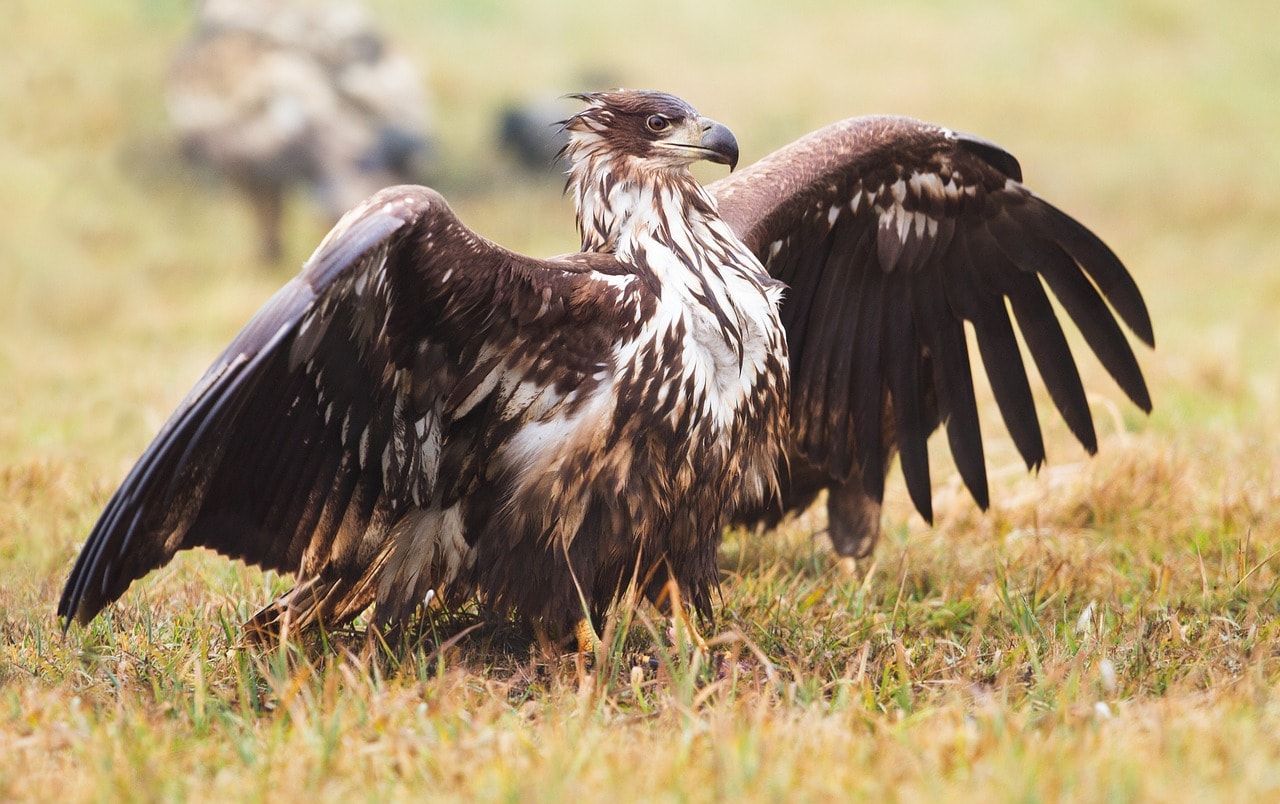 In the United States, only four types of eagles can be found, despite the fact that there are more than 60 eagle species in the world. Of those four species, only two are true residents of the US. The remaining two species are only rarely spotted in the states, and only at very specific times during migration. Still, all four species have been spotted in Florida at one point or another.

Eagles are easily the most majestic of all birds, placing them high in the running for most majestic creatures on the planet. These are gigantic birds, with wingspans that often transcend seven feet in length. Let’s take a closer look at all four species that can be found in Florida, including the two species that aren’t true residents but can be spotted on rare occasions. 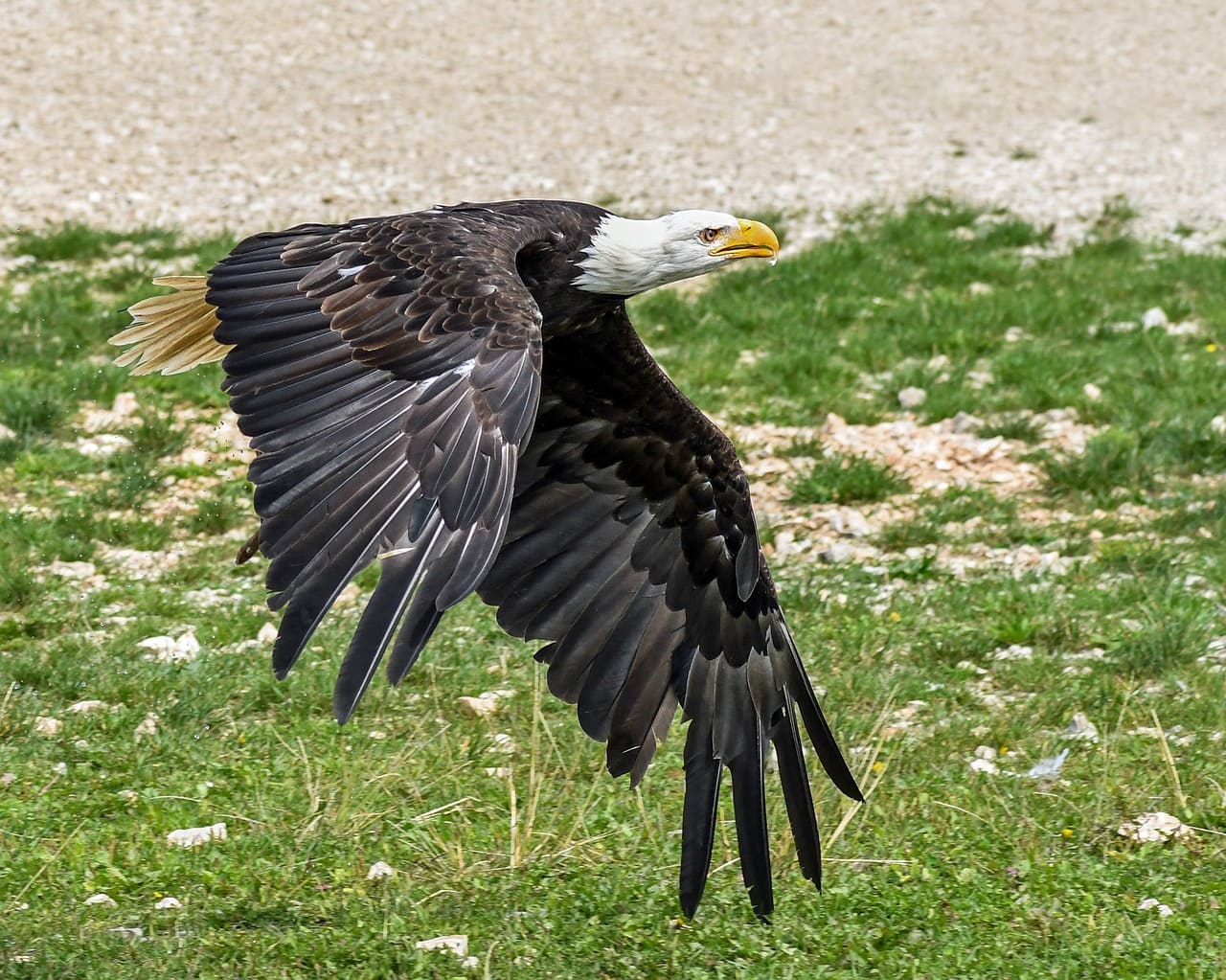 Even if you know nothing about birds or eagles specifically, you almost certainly know of the Bald Eagle; especially if you live in the United States. After all, this majestic avian specimen is on the Great Seal of the United States. It’s the country’s emblem and national bird; a bird that now symbolizes freedom.

Bald Eagles are giants of the skies. They have wingspans of 80 inches on average, and can weigh nearly 15 pounds! Though they’re not the largest birds in North America, they’re not far from the top of the list.

You’ll most often find Bald Eagles nested around bodies of water, such as lakes, oceans, and rivers. During the winter months, you’ll find them spread across the entire US, though in the summer, they’re relegated to just a few specific regions. Their main source of food is fish, though it’s not uncommon for them to feed on mammals, carrion, and even garbage. Despite their status as birds of prey, Bald Eagles tend to scavenge quite frequently. They’re also a bit cannibalistic, often eating other birds such as gulls and waterfowl.

Once considered endangered, the conservation status of Bald Eagles changed in 2007. They’re one of the most successful members of the Endangered Species Act, having made a full recovery with a population that’s stable and expanding. Today, their conservation status is rated as Least Concern. 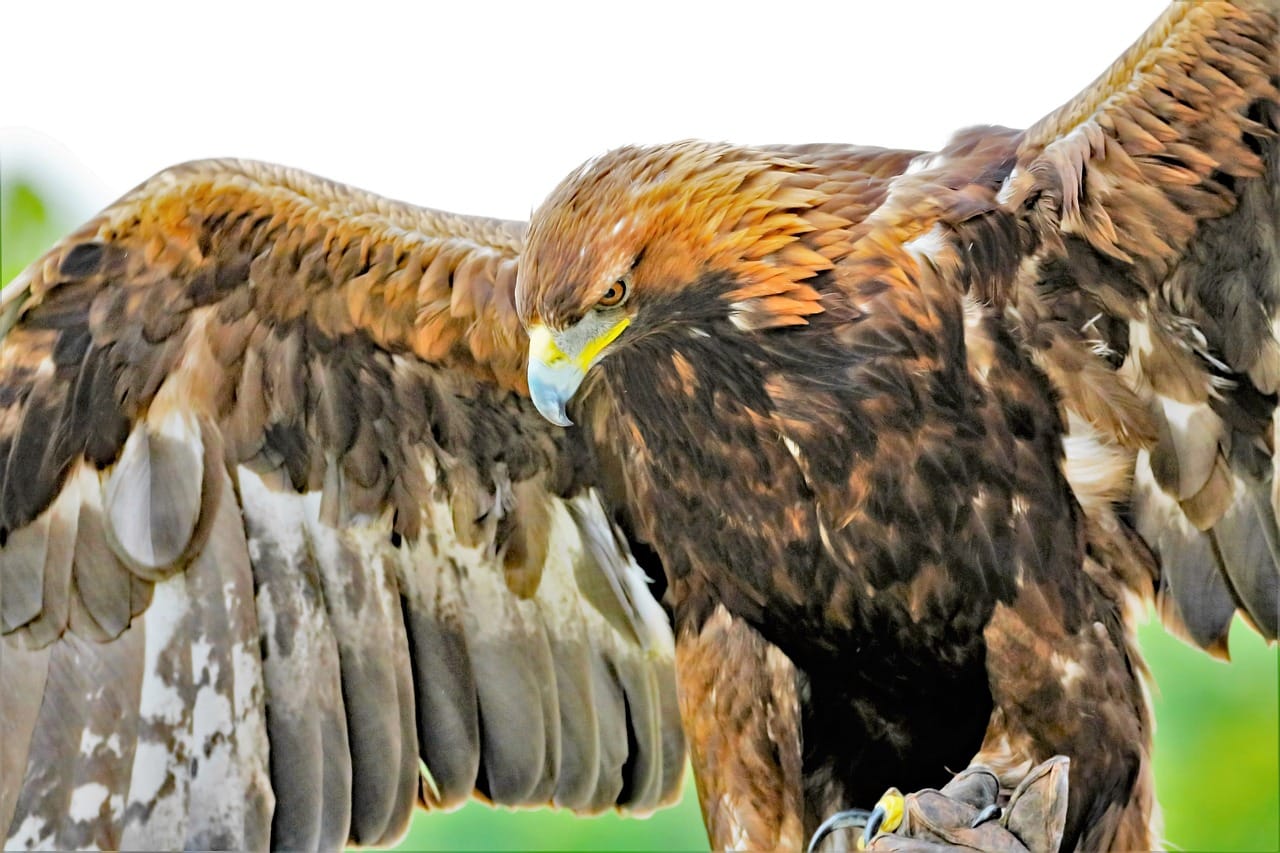 Aside from Bald Eagles, Golden Eagles are the only eagle species that truly call North America home. They can be found across the United States, though they’re much rarer in the eastern half of the country. You’ll mostly find them in the east during the winter months, though they can be seen in the western US year-round.

Golden Eagles prefer to remain in wide-open areas, though they can be found in just about every type of environment. They love to live and hunt in open country situated near mountains, hills, and cliffs. You can find them in the desert, arctic tundras, farmland, forests, grasslands, and along rivers and streams.

Adult Golden Eagles are brown with lighter patches randomly adorning their feathers. They look very similar to juvenile Bald Eagles and are often mistaken for them, though Golden Eagles are actually larger. These massive birds are the largest birds of prey in North America, with wingspans that can spread more than 86 inches!

Though protected under the Bald and Golden Eagle Act as well as the Migratory Bird Treaty Act, Golden Eagles have one of the most numerous and stable populations of any eagle. Their conservation status is currently Least Concern, and there are an estimated 170,000-250,000 specimens currently living worldwide. 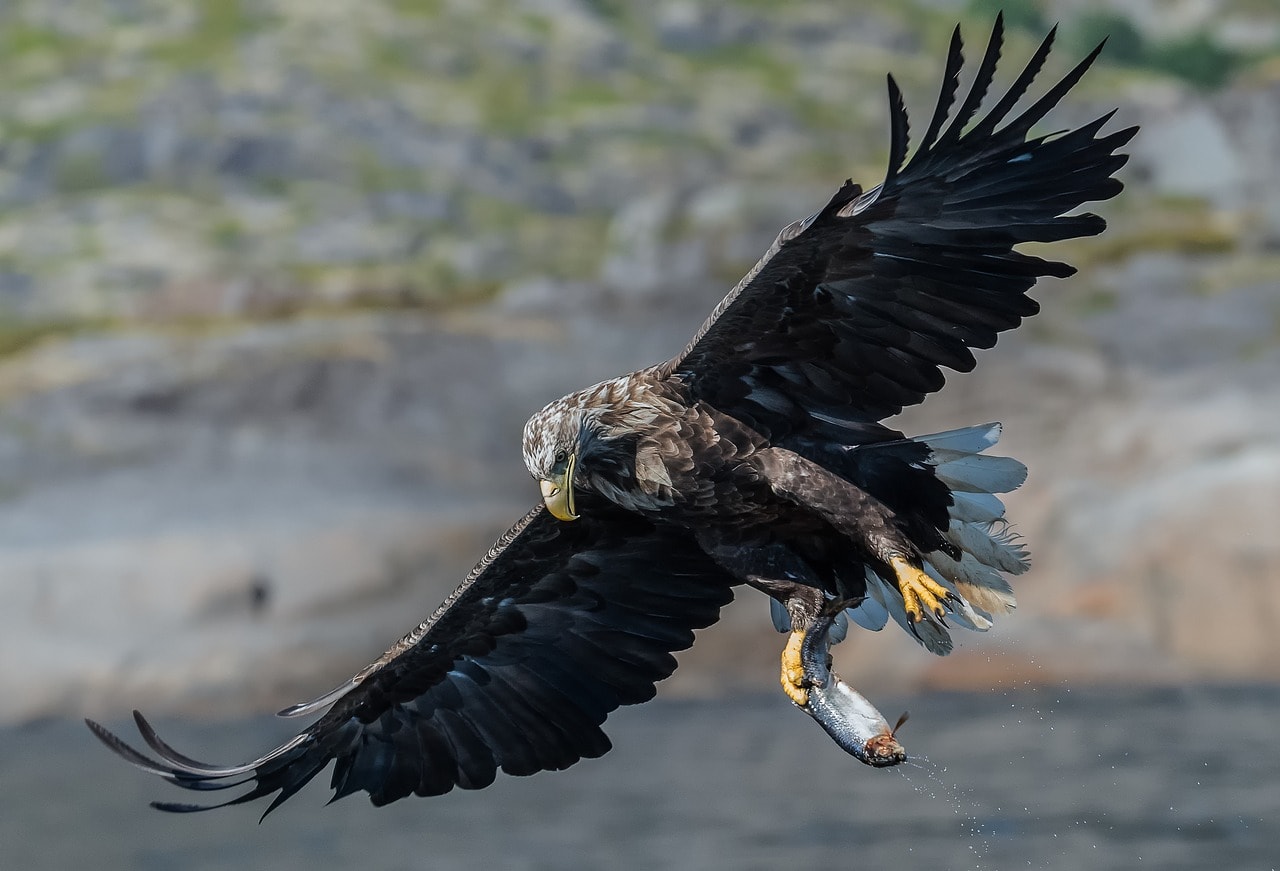 Truthfully, you’ll probably never see a White-tailed Eagle in Florida, or anywhere else in the United States for that matter. If you spot one anywhere in the country, it’s most likely to be off the coast of Alaska. Still, sightings in Florida have happened. They usually occur along coastal cliffs during the short mating season from March to April.

Though incredibly rare in America, White-tailed Eagles are common throughout Europe today. However, the species nearly went extinct and were only saved by rapid reintroduction performed across the United Kingdom. Today, they have a conservation status of Least Concern with a stable population that’s steadily increasing. 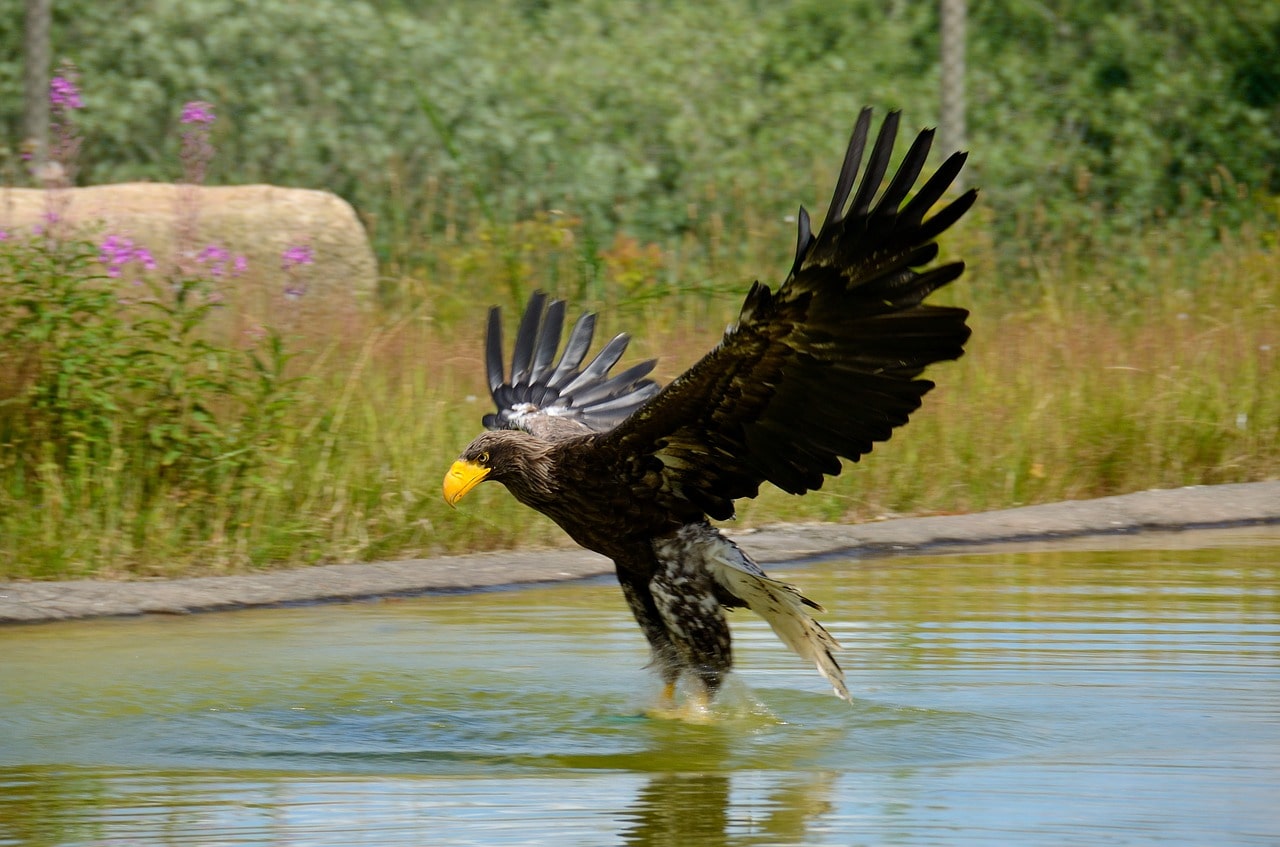 Of the four eagle species it’s possible to spot in the state of Florida, only one has a conservation status below Least Concern; the Steller’s Sea Eagle. Rated as Vulnerable, this species is currently experiencing population decline. They’re always a rare sight in America though, as the species is generally confined to Asia. Rare specimens have been known to make their way to America from time to time.

The Steller’s Sea Eagle is the largest bird in the eagle family, with females reaching impressive weights of over 20 pounds, though most weigh between 14-20 pounds. Still, that makes small Steller’s Sea Eagles larger than some of the largest specimens found in other eagle species, including Golden Eagles and Bald Eagles. They’re not just heavy; they’re also large. Wingspans can reach beyond eight feet and these birds can be up to 3’5” in length.

Adult Steller’s Sea Eagles are seldom spotted in the Americas. On rare occasions, juveniles can be found during the autumn months prior to migration season. You’re most likely to spot them along riverbanks or coastlines, eating up the dead salmon that fill the rivers in autumn rather than hunting live prey.

Even if you spend all year searching for eagles in Florida, you’re probably only going to find Golden Eagles and Bald Eagles. That’s not to say it’s impossible to find Steller’s Sea Eagles or White-tailed Eagles in the state. It happens on rare occasions, but these two species aren’t native to the area. If you do spot one of these rare birds, it’s generally a fluke; usually, a juvenile that’s migrated far out of its normal range. Still, all four of these eagle species have been spotted in Florida before, making it one of the few states to sometimes house all four eagle species that grace the United States.