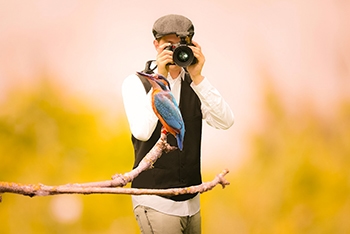 Birding requires patience, a good eye, and a camera with a specific set of features. How often is the perfect shot only a few feet away? You’re going to want a powerful zoom and high image quality to capture the fine details of far-off feathered subjects. But you’ll likely be covering some distance in your search for the perfect avian target, so you probably don’t want a bulky neck weight swinging around and slowing you down.

There’s a lot to consider when buying a camera, but we’ve done the hard work for you. As avid birders ourselves, we know what makes a camera great for capturing these majestic winged creatures in all their glory. We’ve put all the popular models to the test to see which ones will be victorious. These nine reviews will help make our choices clear, and our recommendations can help you streamline the decision so you can spend more time spotting fowl and less time researching cameras.

A Quick Comparison of Our Favorites

The 9 Best Point and Shoot Cameras for Birding 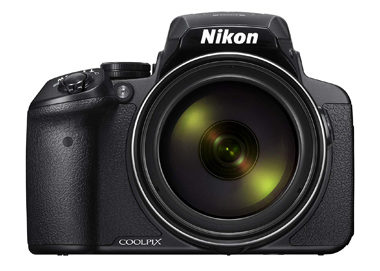 When you finally find the elusive target that you’ve spent all day searching for, the last thing you want is to miss the perfect shot because your camera lacks the zoom power. With the Nikon COOLPIX P900, you’ll never experience such a problem. With an 83X optical zoom that’s equivalent to a 2000mm lens, this camera can capture far off action in fine detail. Every feather of your target will be captured with superb detail. Our only real complaint was that it has a rather slow recovery time between photos, but we can deal with this for the incredible performance at such a low price.

To really see your subject while you’re shooting, the P900 includes a high-resolution electronic viewfinder that automatically turns on when you lift it to your eye. We were impressed with the clarity the viewfinder provided which made it even easier to dial in our shots. When spending all day out hunting for the perfect photo, you don’t want to worry about whether your battery will last or leave you out of luck. Luckily, with 360 shots per charge, you shouldn’t have to even worry about it. 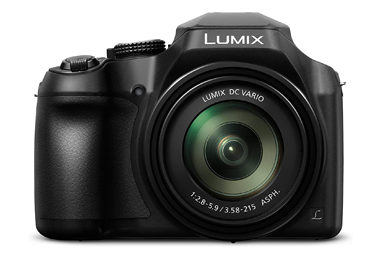 With a lens that zooms from 20mm all the way to 2000mm, it’s hard to believe the amount of performance that Panasonic packed into the LUMIX FZ80 at such a low price. While you can get some pretty impressive zoom with this camera, the full 2000mm isn’t usable. The end of the zoom range is digital zoom and it introduces too much grain to the image. The low-light performance is also not the best, but for the price, it’s very hard to complain.

We were impressed with how quickly this camera was able to capture a picture and then reset for the next. One of our favorite features was the POWER optical image stabilizer or O.I.S. This allows you to get perfectly clear pictures, even when shooting by hand. No more lugging your big old tripod around just to get a few shots. When we’re capturing birds in flight, we often find it’s much easier to shoot a 4K UHD video instead and pull still frames from the video later. The FZ80 excelled in this department, thanks to its impressive video capabilities. In the end, we think it’s the best point and shoot camera for birding for the money. 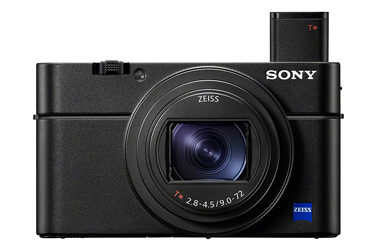 For pocket-sized professional performance, it’s pretty hard to beat the Sony DSCRX100M7. This camera is widely regarded as one of the best point and shoot cameras around, and after testing it, we can see why. One of the only things that kept this camera from our being our top recommendation is the high price, which is beyond the budget of most hobbyists. The 8.3X optical zoom also isn’t the most impressive, but it’s completely clear and in focus to the end of the range.

We like to use continuous shooting for capturing avian flight, and with 20 fps capabilities, the Sony RX100 is one of the most impressive continuous shooting cameras we’ve ever had the pleasure of using. Alternatively, you can use the 4K video capabilities and pull still images from your video frames. The image stabilization is top-notch and eliminated any blur from shaky hands or movement. Likewise, the autofocus was blisteringly quick and we never saw it miss. When walking all day in search of an elusive subject, you’ll appreciate the tiny form factor of this camera weighing in at a meager 0.61 pounds! 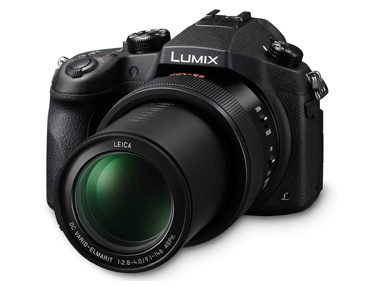 Thanks to its large one-inch sensor, the Panasonic LUMIX FZ1000 offers solid low-light performance for the budget price point it can be purchased for. It features a 16X zoom, though, in reality, the end of the range is all digital and not useful for taking clear photos with high quality. Up until the end of the optical zoom, this camera shoots incredibly clear and detailed images that are free from blurring or grain. This is partially due to the hybrid optical image stabilization with 5-axis correction that eliminates hand shaking and other movements from affecting the image. Trying to capture a sequence such as a hawk diving in for the kill? The FZ1000 has impressive 4K video capabilities that allow you to pull any frame as an 8MP still image.

Though we’re impressed with this camera overall, it has some drawbacks that kept it from a top-three recommendation. First, it’s very large and bulky. Carrying this around all day can become a nuisance, especially when you consider its two-pound weight. This can also make it harder to hold steady, but luckily the O.I.S. is there to save your shots.

Fujifilm is a leading manufacturer of high-end cameras packed with the latest technology. The X100F is one of their smaller offerings, and we like the compact, ergonomic design. It has some unique traits that we appreciated such as the built-in ND filter. If you don’t know about ND filters, they cut the amount of light that reaches your sensor, allowing you to keep a wide-open aperture without blowing out your image. Usually, you have to carry around a set of ND filters if you want this effect, but the X100F has a three-stop one built-in.

With an ISO range up to 12,800, you’ll have plenty of room to crank it up for shooting in low-light situations. The 91 autofocus points ensure your target is always in focus when you’re ready to take the shot. But some fatal flaws kept this very expensive camera from climbing up our list. For instance, it doesn’t zoom. This is going to limit the types of shots you can take, especially in bird photography when your target is often far away and moving rapidly. There’s also no 4K video capability from this camera, our final drawback. 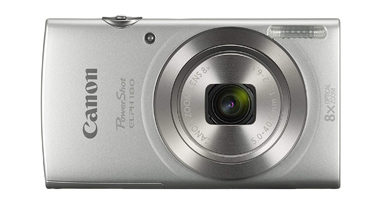 The Canon PowerShot ELPH marks the entry point into digital camera photography. It’s the most affordable model we tested, and honestly, the performance wasn’t bad, especially considering the price. Equipped with an 8X optical zoom, you can get a pretty close-up image of a distant target. It’s obviously not one of the more powerful zooms we tested, but for a budding bird photographer, it’s a great place to start. To make sure your shots look good, the ELPH has optical image stabilization built-in and it was rather effective.

What holds this camera back is the image quality that’s not up to the level of other competitors. Of course, this camera is a fraction of the cost, so it’s going to be a tradeoff between performance and price. Since it has a very small sensor, the low-light performance was very grainy and didn’t produce nice shots. You can also forget pulling stills from videos since this camera tops out at 720p video recording. 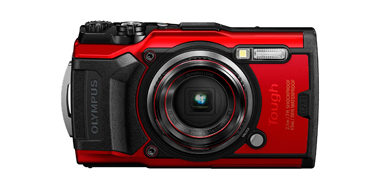 Built tough for all weather conditions, the Olympus Tough TG-6 could probably survive a nuclear blast. That may be an exaggeration, but not by much. It’s waterproof, crushproof, dustproof, shockproof, freezeproof, and even anti-fog. However, unless you’re snapping pics of penguins in Antarctica, then you may not need all of these features. We do love the robustness, and that’s what you’re paying for with this camera, not the mediocre image quality.

With an optical zoom of just 4X, you won’t be getting close-ups of anything that’s too far off. The image quality will also impede your photos since they won’t be as crisp and clear as you probably hope. That said, the 4K UHD video worked very well and we were impressed by it. Overall, it’s overpriced for the performance, unless you need the all-weather capability. 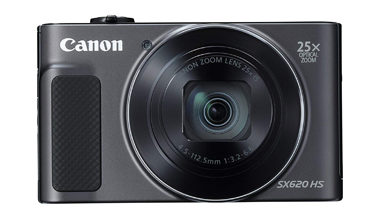 Equipped with a potent 25X optical zoom, the Canon PowerShot SX620 is a solid performer packed into a small frame. It’s compact enough to fit in your pocket but powerful enough to take clear pictures of far off subjects. The image stabilization makes sure that even when you’re zoomed in all the way your photos come out crisp.

We’ve gotten used to capturing high quality 4K video to pull in-motion images of birds mid-flight, but the PowerShot SX620 doesn’t have 4K video capabilities. It also has pretty dismal low-light performance, but we usually don’t expect a compact point and shoot to perform well in such conditions. We were hoping for much better battery life though. At just 295 shots per charge, this camera is on the low side of the spectrum and we’d worry about taking it out all day without a spare. Though it’s pretty inexpensive, we think you’d be much better off with the higher image quality from the Panasonic LUMIX FZ80 that was our pick for the best value. 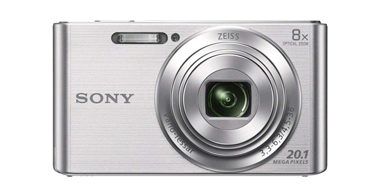 Priced accordingly, the Sony DSCW830 just barely made the list thanks to its lower quality images that didn’t impress us. That said, it’s one of the most affordable ways to get into bird photography. The optical steady shot image stabilization helps you get clear pictures, even if the resolution isn’t the best. The 4X zoom is definitely lacking and won’t get you any close-up images of far off birds.

When taking repeated shots, the recovery time between them is agonizingly long causing us to miss many shots. The poor low-light performance is to be expected. However, the 720p max video leaves a lot to be desired. Though it’s an affordable way to get started with bird photography, we suggest waiting until you can get a more solid entry point such as the FZ80 in our second spot.

Bird photography requires a camera to have certain traits if it’s going to excel. Not all of the cameras featured in our reviews had these characteristics, but the three that we recommend do. Before you make a purchase and get suited up to go snap some tail feathers, we’re going to summarize our recommendations so they’re fresh in your mind when you’re ready to decide. Our favorite overall was the Nikon COOLPIX P900, which offered high-end performance at an affordable price point. The 83X optical zoom was the best we saw and got us detailed close-up shots of birds that were far from where we took the picture.

With a zoom range from 20mm-2000mm, the Panasonic LUMIX FZ80 was our second-place pick and the one we thought provided the best value overall. It’s very affordable, though it’s packed with important features like the POWER O.I.S and 4K UHD video capabilities that allow you to pull still images from any video frame. For the absolute best performance irrespective of price, the Sony DSCRX100M7 is our premium pick. With 20fps continuous shooting, impressive image stabilization, incredibly fast autofocus and light weight of just .61 pounds, it’s easy to see why.