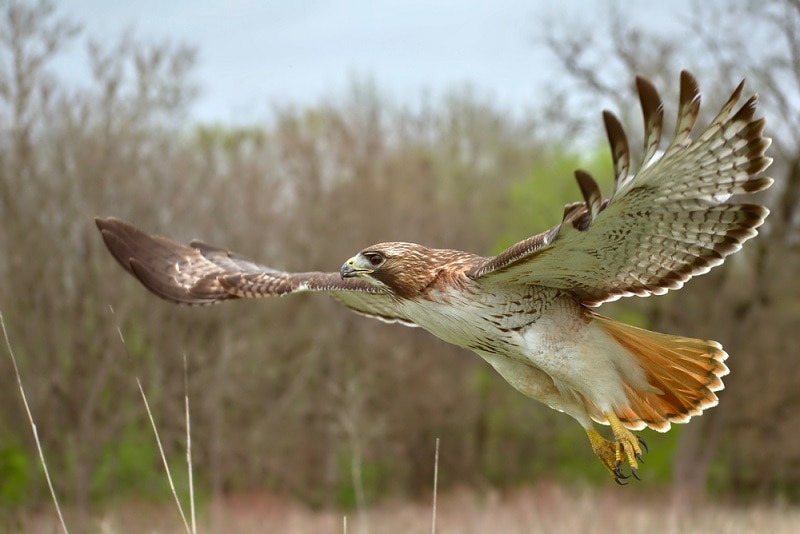 The Red-tailed Hawk is a member of the Accipitridae family of the genus Buteo. The latter includes other birds of prey, such as the Broad-Winged Hawk, Rough-Legged Hawk, and the Swainson’s Hawk. It is one of the largest species of this genus. This raptor shares many characteristics with these birds in both physical and behavioral traits.

Red-tailed Hawks also share some of the differences between the two sexes that define this family. Many of these traits go hand-in-hand with the life history of this raptor. When you put it into context, it’s easy to understand the variations between male and female birds. Our guide will highlight these differences and conclude with an overview of this noble predator. 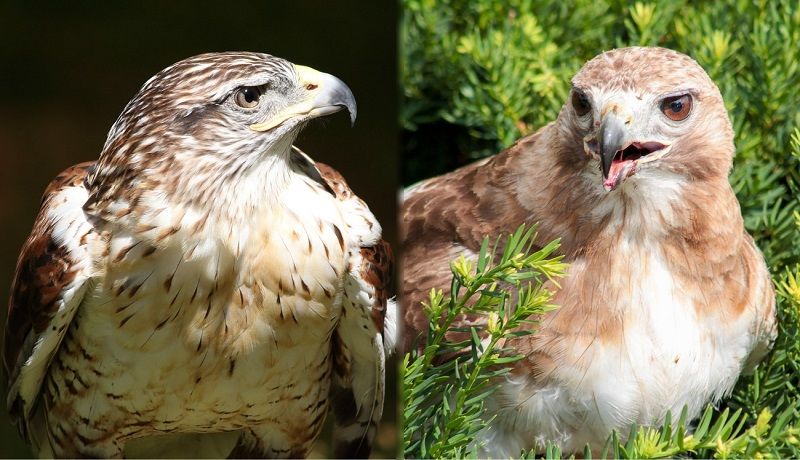 Red-tailed Hawks are monogamous birds that mate for life. That’s one of the primary reasons that males and females look alike. The male doesn’t need to have showy plumage to attract a mate every breeding season. Therefore, the differences between the sexes don’t rest with their appearance. You’d be hard-pressed to tell them apart without some additional information. 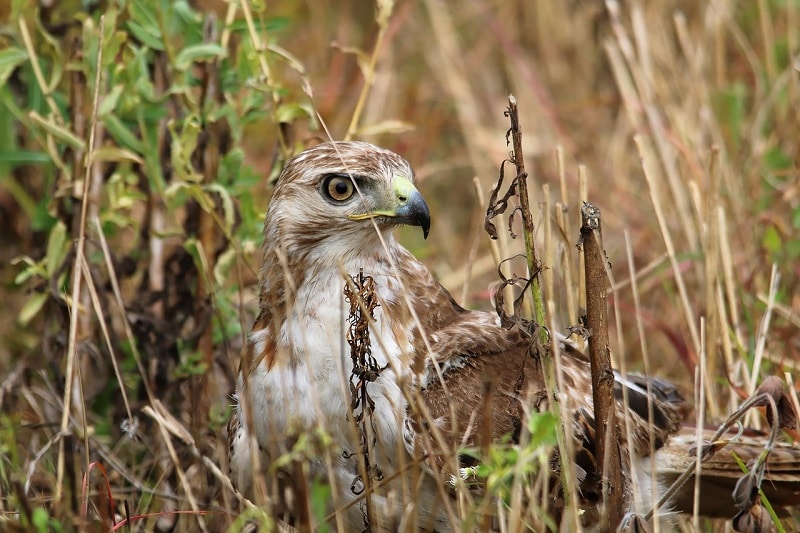 The height of the male within this range is about 11–14 percent shorter than the female. The weight is another story. It can vary between 11–24 percent, with the most significant differences on the low end of this range. That gives the female a stockier appearance that is evident when looking at birds of the same again, side by side.

The variations between male and female Red-tailed Hawks are also apparent when observing their behavior. The male’s role is to defend the pair’s territory, which it will do quite fiercely. Many other raptor species hunt the same prey. Therefore, safeguarding their area is of vital importance to the survival of the pair and their offspring.

Red-tailed Hawk pairs take a joint role in nest building and raising of the young. The male will bring food to the female when it’s on the nest. The male will also take over watching the brood after they’ve hatched to give the female time to hunt.

Some hawks are year-round residents in some areas. Raptors in those places will overwinter together to continue forging their bond. Migrating birds will soon pair up again the following spring to repeat the process of courtship, nest building, and raising their brood.

Scientists recognize both eastern and western races of this raptor. There are also 16 subspecies of Red-tailed Hawks. The differences exist primarily with coloration. Size variations appear random due to genetic blending where overlapping ranges occur. While different sizes are possible within the species, they aren’t significant when it comes to distinguishing the two sexes. 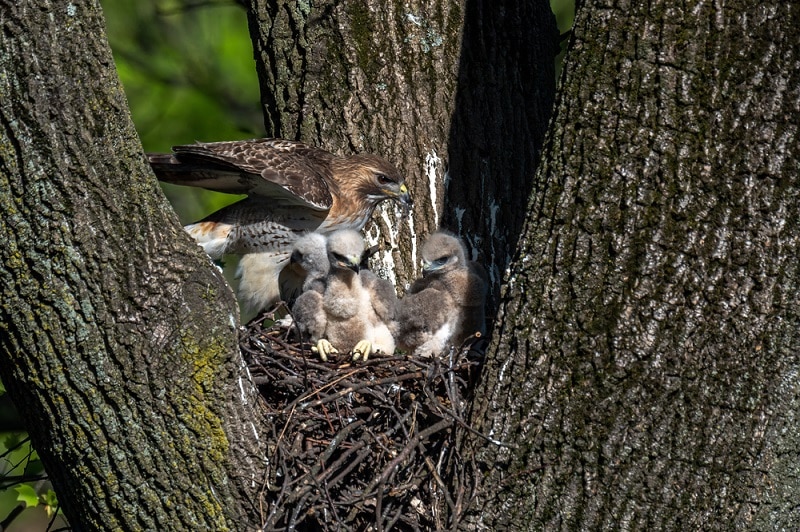 Other variations also exist between juvenile and adult hawks. They typically have dark-colored tails that lack banding and the characteristic red hue. Males and females are not different and show no sexual dimorphism.

Females are noticeably larger than males. The reason rests with their role in rearing young. Its stockier body allows the bird to cover its clutch of eggs completely to protect them from the elements. It also gives it a better fighting chance at defending the nest. It’s worth noting that while the female has a bigger body, its wingspan is the same length as the male.

Red-tailed Hawks show differences more in behavior than anything else. The keen observer will be able to distinguish the sexes if they watch closely. The female spends more time on the nest both during incubation and afterward. Its primary role is to defend the nest from intruders. The female’s tenacity is just as fiery as the male’s.

Another noteworthy behavioral distance involves brooding. The males take on the role of the care giver during this time, bringing food to the female and young. While they are altricial at hatching, the brood soon becomes active, making this an exhausting time for both parents. It’s not unusual for them to lose 10% or more of their weight. 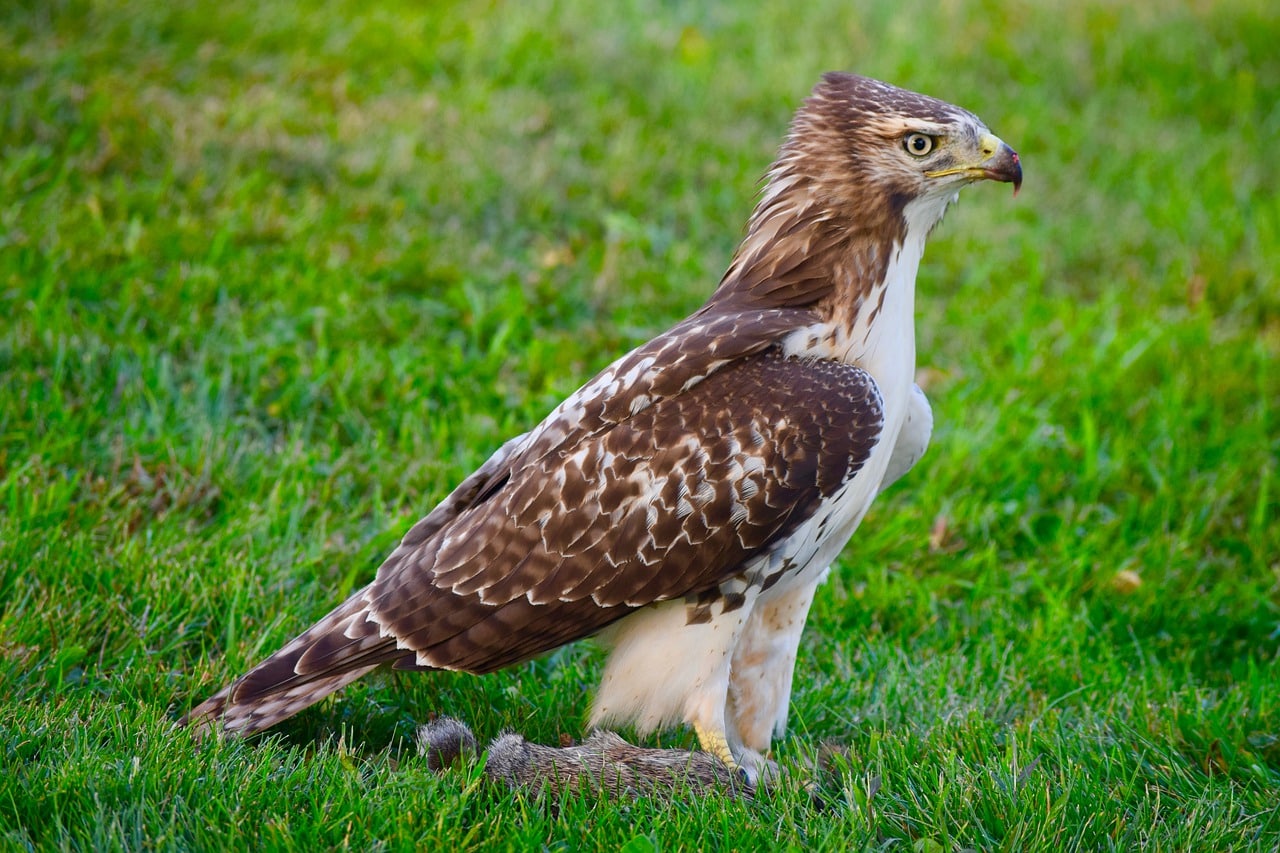 The range of the Red-tailed Hawk extends all across North America and into Central America. It is an accidental species in Bermuda and the northern countries of South America. The raptor uses several types of habitats, including grasslands, shrublands, and forests. The species has adapted well to people, so that you may even find them on agricultural lands and larger parks.

Both male and female Red-tailed Hawks are opportunistic feeders, a trait they share with many raptors. Of course, variations exist, depending upon the habitat. Rodents and rabbits make up a significant portion of their diet. However, it’s not unusual for them to take upland game birds and even reptiles. The hawks hunt by sight, surveying the landscape from an overhead perch or while soaring.

The raptor’s best chances for success come from perching. They will use trees or even telephone pools as roosting spots. The bird is most likely to use soaring as a hunting method on warm days when the thermals allow the hawk to conserve energy from flapping its wings.

One of the most unusual behaviors of both male and female Red-tailed Hawks is the elaborate aerial displays the two undergo, the so-called sky dances. The raptors perform these rituals for forming new bonds or reinforcing existing ones. The male engages in this behavior the most, sometimes going solo while the female observes.

The International Union for Conservation of Nature and Natural Resources (IUCN) lists the Red-tailed Hawk as a species of least concern, with an increasing population. The organization estimates that it has rebounded by 177% in the last 40 years, thanks to the 1972 DDT ban in the United States. Its opportunistic feeding pattern is another vital factor in its success as a species. 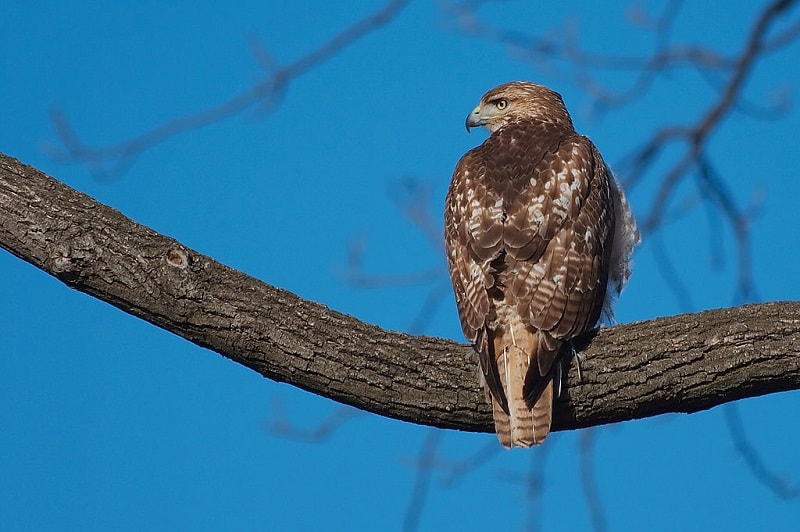 The Migratory Bird Treaty Act of 1918 provides federal protection for this raptor, with fines up to $15,000 for violations. Other threats to the population of Red-tailed Hawks rest with climate change and the use of anticoagulant pesticides on pests. Poaching continues to plague these birds, along with many other bird and wildlife species.

Their tolerance for humans has given the Red-tailed Hawk an edge. The species has adapted to the environmental pressures that often accompany habitat encroachment. The raptor’s behavior also comes into play with more interactive actions, such as falconry. While it lacks the speed and maneuverability of falcons, its demeanor makes it an excellent choice for beginners and experts alike.

Red-tailed Hawks are handsome birds that are sure to catch your eye the next time you see one flying the thermals. The differences between male and female birds are a function of their roles in territory defense, breeding, and brooding their young. The fact that the species has recovered so well makes it a sure bet that you’ll continue to see these raptors perched on utility poles for years to come.

4 Types Of Blue Bird Species In The US

Who Invented the Telescope and When?