Binoculars vs Telescopes: When to Use Which? 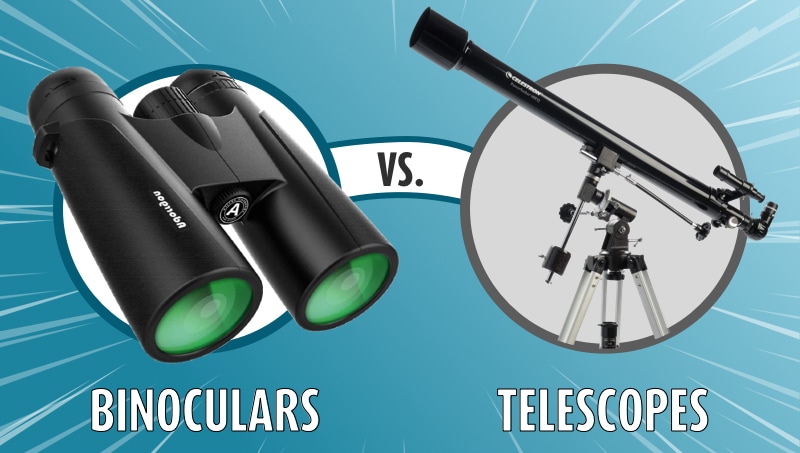 With so many different types of optics out there, using the right one for any given situation can become confusing. Take binoculars and telescopes, for instance. Each of these can be used for a wide variety of situations including some that overlap. Both binoculars and telescopes magnify far away objects in order to let you observe and examine more closely. But which is best for you?

Some occasions may call for a specific optic to use, but there are a few times where the best tool for the job may surprise you.

A Brief History of Binoculars

In 1825, J.P. Lemiere created the first real set of binoculars. This rudimentary pair of binos utilized Galilean optics technology (more on Galileo later) and glass lenses. This is where the eyepiece for the set is actually inverted and curved lenses are able to magnify the designated object seen. The shape of lenses also flips the image right side up through the inverted eyepiece so the user can see the image “as-is”. 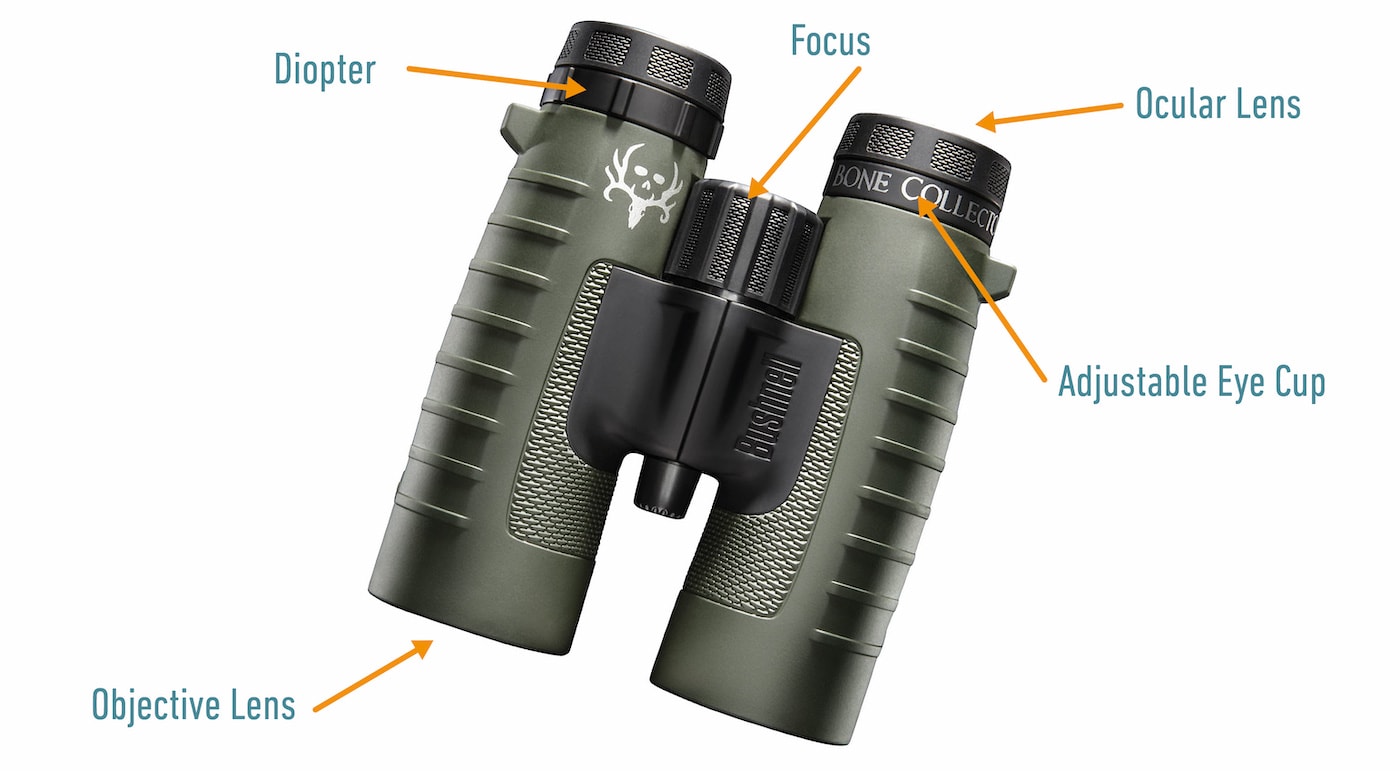 But these early styled binoculars didn’t really catch on as binoculars didn’t magnify as much as they should, and the binoculars had a very narrow field of vision. However, it didn’t take too long for Ignatio Porro to come along and create the Porro or prism design — the design we still use to this day. And while Lemiere actually created the very first practical set of binoculars, Ignatio Porro’s 1854 design leads him to be credited as the father of modern binoculars.

From sporting events to hunting to bird watching, binoculars are a great choice for down-to-earth applications. There are three types of binoculars and four major categories of binoculars you’ll find on the market today. Let’s start with the types:

These are probably the first things that pop in your head when you think of binoculars. They’re a standard set of binoculars that magnify things at distance often with variable zoom control. 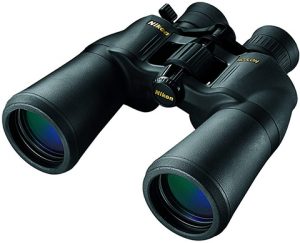 These are really neat, especially if you have shaky hands or need extra stability for your predicament. However, be warned — this option is extremely pricey. 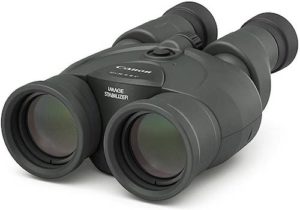 Whether it be to up your golf game or dial in your scope when hunting game at a distance, laser rangefinders are an amazing resource to have. They work by sending a laser to a location that then bounces back and returns. The rate of return is calculated to give you a pinpoint accurate distance of the object in question. 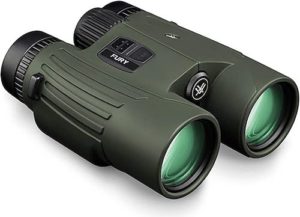 This doesn’t mean your set of binoculars will be jewel-encrusted. The ruby coating is actually a specialized compound applied to the lenses which are colored ruby. This is supposed to minimize glare, haze, and reflections. You’ll find this primarily on lower end binos as a marketing gimmick. 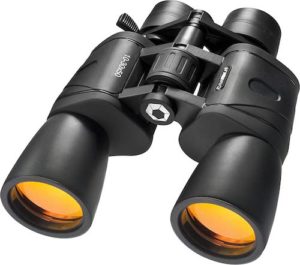 They work on the concept of using two convex lenses to focus and thus, magnify distant light rays and objects. Convex lenses are lenses that are curved with the outsides of the lenses being thinner than the middle portion. Convex lenses bend the light received at a distance and direct it to the thicker glass which in turn magnifies it (and the image).

But the image returned is actually upside down! That’s why quality binoculars will have two prisms in each tube. These prisms act together to revert your image right side up in order for you to view properly. There are two primary types of prisms: Porro and roof prisms. Here’s how they work: 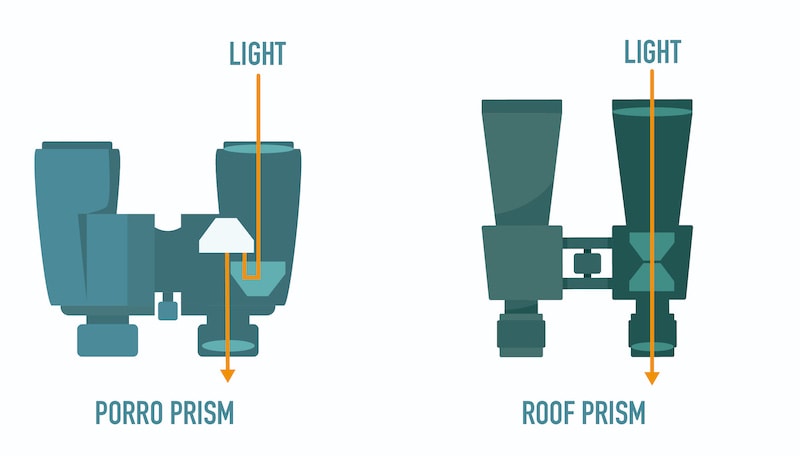 However, since the lenses and prisms are made of glass and bulky housing, binoculars can be pretty fragile and awkward to carry. This is why many pairs of quality binos end up just shoved aside in a closet or elsewhere.

What's the Difference Between BaK-4 and BK-7 Prisms?

Most intermediate to high-end optics use BaK-4 or BK-7 glass Porro or Roof prisms. Both types were created by German optical glass manufacturer, Schott AG. BaK-4 is a glass designation that represents BaritleichKron (German for “Barium Crown”). It has a higher refractive index than BK-7 glass, meaning more light from the periphery of the field of view gets through the prisms and reaches the eyepieces. This brightens the edge of the field while leaving the middle intact.

BK-7 is generally considered “cheaper” and less desirable than BaK-4, but it’s actually better in some applications such as astrophotography.

A great set of binoculars can give you some very powerful magnification capabilities. Many modern sets come with between 6x and 12x max magnifications, but 20x, 25x, and 40 x are becoming more common. With a pair of 8×42 binoculars, it means that you’ll be able to see something up to 8 times larger than you can with your naked eye.

But with great magnification comes an increased shakiness. And that’s because every single little twitch is magnified as well. When using super high-powered binoculars, you may want to invest in a tripod.

Using two vision tubes, binoculars allow for a much greater field of vision than other single tube optics such as scopes, monoculars, and telescopes. And when at low magnification powers, you’ll be able to spot a target much quicker. 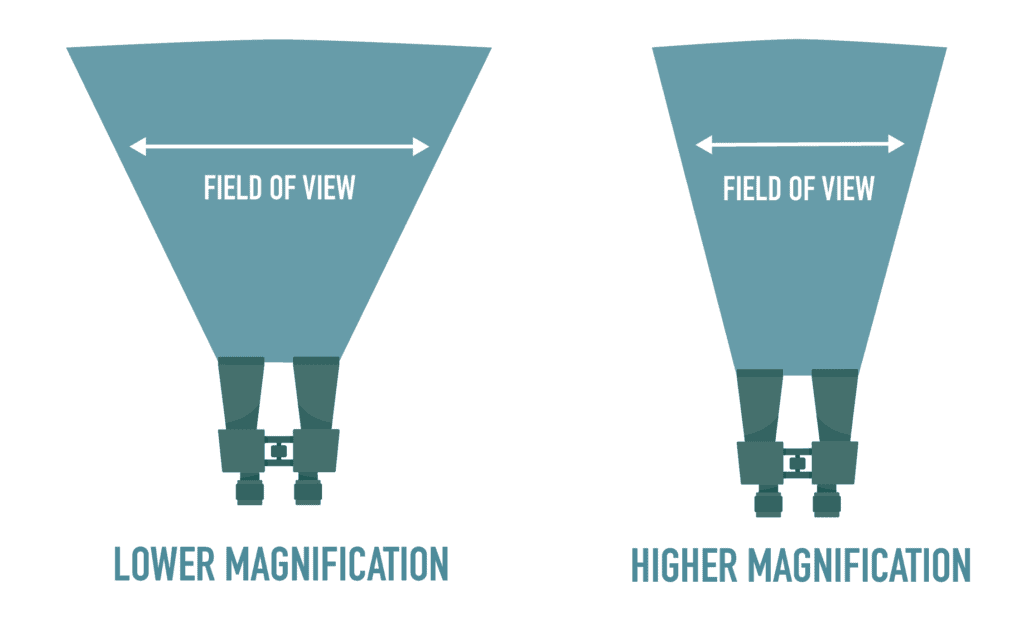 You may have heard the story that Galileo Galilei invented the telescope. And he did, but he wasn’t the very first. As a matter of fact, a Dutchman named Hans Lippershey first applied for a telescope patent in 1608. However, Lippershey was denied because there were claims that he’d stolen the design (or parts of it) from another eyeglass maker in the town—Zacharias Jansen.

The next major player to enter the telescope patent arena was Jacob Metius, another Dutchman. This happened just a few after Lippershey applied. But his claim was also denied due to counterclaims. In 1609, Galileo heard about the Dutch perspective glasses. And shortly, he had created his own. His model could magnify objects up to 20x. And after presenting his invention to the Venetian Senate, he became fully recognized as the inventor of the telescope.

When it comes to consumer telescopes, there are many different sub-types. However, most of them fall under one of two categories.

These particular scopes contain lenses that capture and refract light along a focal path within the tube. This light eventually makes its way to the eyepiece of the telescope where you can see the image created. Galileo’s style of telescope is a refractor scope along with other types such as achromatic scopes, apochromatic scopes, and superachromat telescopes.

Reflector telescopes aren’t built with lenses, but mirrors. These actually elongate the focal path of the light that enters them. Invented by Sir Isaac Newton in the 1680s, these are very popular because they are much cheaper to purchase.

Now, between the two, there are some real noticeable differences. Refractor types are usually much lighter and portable than their reflector counterparts, however, they’re typically more expensive. Reflector telescopes collect more light and are on the cheaper end, but just don’t have the sharpness of a refractor telescope.

As explained above, telescopes can have two different main light focusing instruments: lenses and mirrors.

Refractor telescopes with actual lenses are the more expensive of the two. However, they allow less light to enter and ultimately reach your eye. Despite this, the use of actual lenses does allow for a crisp quality and sharpness unseen in reflector telescopes.

Reflector scopes utilize mirrors. These are cheaper to produce, and those savings are passed on to the consumer. And while these telescopes allow more light into the viewing tube, they just don’t shine with the clarity that you’ll find on a refractor telescope.

Telescopes are designed to view objects at extreme distances. Modern telescopes often start magnifying at 30x and greater with even more in-depth zooms. But because of the intense magnification, you’ll absolutely need to have a quality tripod. Any movement, no matter how slight, will throw off your view of whatever object you’re observing. And they can be a bit tricky to set up.

RELATED READING: Spotting Scope vs Telescope: Which Should You Choose?

Unlike binoculars, telescopes have a very limited field of view. Their single tube construction limits their effective viewing field, and when coupled with their high magnification power, it makes for a very pinpoint view. However, once properly focused, nothing can beat the image quality of a good telescope.

When to Use Binoculars

So, when would you use binoculars over telescopes? A good rule of thumb is that if you’re going to be moving around you should use a pair of binos. Telescopes can be very cumbersome to set up and take down. And if you’re moving from place to place, they’ll just become a burden.

Also, if you’re not looking at objects at extreme distances, don’t bother with a telescope. You’ll actually have trouble simply finding the object you’re looking for.

Here are some situations in which a pair of good quality binoculars is preferred to a telescope setup:

And if you’re worried about bringing your expensive binoculars to any of these places, simply pick up a cheaper pair of field glasses. They may not have the highest quality as your best set of binoculars, but you won’t feel too upset if they break.

When to Use a Telescope

Although binoculars may seem like the more practical choice, telescopes certainly have their own niche that binoculars just can’t compete in.

Examining the heavens is pretty much what telescopes were designed to do. They’ll give you the utmost quality and depth when viewing astronomical entities such as stars, planets, nebulas, etc. And although the Earth is constantly rotating and moving your target, the rotation is slow enough and predictable allowing you to make minute adjustments to your telescope for best observation. 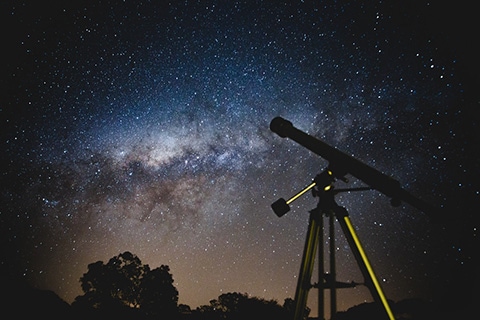 Many telescopes now are built with photography in mind. And since they’re mounted on tripods, you’ll get that perfect image stability. Also, telescopes make long exposure photography super simple. 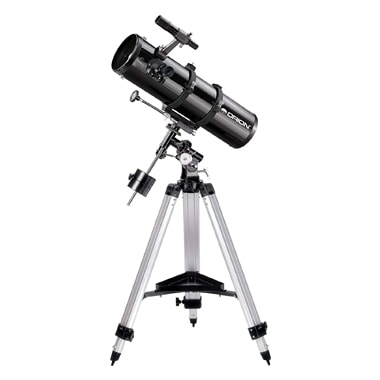 When it comes to pricing, it really depends on what magnification powers and level of quality you’re looking at.

A low-powered telescope is still really powerful, so in order to find a pair of binoculars with the same capability, be prepared to spend some money. In this situation, a telescope will most certainly be cheaper to buy than the binos.

However, a high-powered telescope can get to be very, very expensive. Some of them can even be in the range of tens of thousands of dollars.

Now that you know some of the key differences, which is best for you? That all depends on what you’ll be using them for.

If your primary concern is stargazing and photography, you may want to opt for a telescope. There are affordable options for amateur astronomers and photographers, but there are plenty of premium options for professionals.

But if you’re looking for something more practical for everyday life, you should probably just stick with a pair of good binoculars. Unless you specifically need a telescope, you’ll find them to be unwieldy, expensive, and rarely used.