14 Types of Blackbirds in Minnesota (With Pictures) 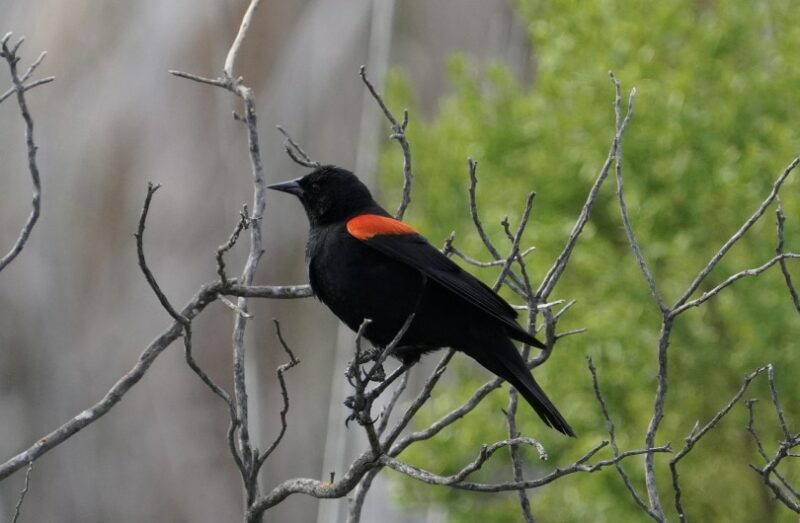 Before we begin, we must clarify what we mean by “blackbirds.” Yes, the term describes the color of the species. However, scientists also use it to define the Icteridae or New World Blackbirds family.1 Therefore, we’re talking about evolutionary relationships and birds that aren’t always completely black. Some have very little. We must delve deeper into this classification.

“New World” refers to species from the Americas as opposed to Europe and Asia. It includes animals up to medium size with at least some black coloration and part of the passerine or perching birds. It’s a diverse group of species, with the majority living in tropical regions. We’ve listed them alphabetically.

The 14 Types of Blackbirds in Minnesota

The Baltimore Oriole visits the entire state of Minnesota during the breeding season. Birdwatchers admire this beautiful species with its melodious song and gorgeous black and orange plumage that define the male. The female has yellow in place of the orange, which may have an aposematic effect. The term describes coloration that acts as a warning to predators of potentially unpalatable or toxic prey.

The distinguishing feature of the Bobolink is its unusual coloration. Unlike many birds, the lighter parts of its foliage on its back and head instead of the reverse. Its songs are a complex mix of bubbling squeaks and whistles. It’s the quintessential prairie and grassland species with an exceptionally long migration route of an estimated length of over 12,000 miles.

The Brewer’s Blackbird is probably what most would think of when hearing this descriptor. It is relatively new to the eastern part of the state. It’s an example of an animal that benefited from humans and agriculture since it prefers open habitat. You’ll occasionally see it wading in water for insects. Otherwise, it feeds primarily on seeds.

The Brown-Headed Cowbird used to be known as the Buffalo Bird because of its close association with the American Bison. These animals roamed the prairies with the cowbirds feeding on the insects they stirred up while grazing. Most birdwatchers know this species as a brood parasite that is not welcome at feeders.

The Bullock’s Oriole is an occasional visitor to Minnesota. Its breeding range is west of the Mississippi River. It overwinters in Mexico. It eats insects and spiders and will also feed on nectar and fruit. The bird has a particular fondness for grasshoppers when they’re available. It is an adaptable bird and a short to medium-distance migrant that travels at night in small flocks.

The Common Grackle is both an ecological success story and a tragedy. It is an adaptable bird with a population that has increased dramatically over the years in part due to its tolerance of humans. Unfortunately, it has also become an agricultural pest, forcing eradication efforts. Despite a global population of 69 million, it is a near-threatened species.

The Eastern Meadowlark is a year-round resident in southern Minnesota, venturing farther north during the breeding season. You’ll find this bird perched on utility lines, gleefully singing its melodious song. Its distinctive coloration makes it easy to spot. Unfortunately, its numbers have declined in recent years, making it a near-threatened species due to habitat encroachment and degradation.

The Great-tailed Grackle is appropriately named because of its large size. Its story is interesting. Instead of retreating because of human encroachment, it expanded its range to become an occasional visitor to Minnesota and other parts of the country. It is an omnivore that will take various foodstuffs, including insects and reptiles. Like its counterpart, it is also an agricultural pest.

The Orchard Oriole is a handsome bird with a black head and tail on its rust-colored body. The female’s plumage is a drab olive-yellow. The bird lives near water or forest edges, feeding on insects. It supplements its diet with nectar during the spring. This species benefits humans as a predator of the cotton boll weevil.

The Red-winged Blackbird is a common sight in open wetlands, often congregating with other avian species. Its red epaulets are its identifying trait, which it uses to ward off intruders approaching its nest. Its size and vocalizations vary depending on its location. The blackbird is a generalist and will take various foodstuffs, including carrion.

The Rusty Blackbird is recognizable immediately with its entirely black body and piercing yellow eyes. The female has coloration more befitting its name. Scientists don’t know as much about this species because of its northern range. It passes through Minnesota during migration going to its breeding grounds in Canada and Alaska.

The Scott’s Oriole is an early riser even for birds. You’ll often find it perched in yucca gardens where it will find insects and nectar to eat. It’s an uncommon sighting in Minnesota, with the latest record from October 2011 in the northeastern part of the state. Its territory varies in size, depending on the food availability. Not much is known about this species because of its wariness toward humans.

The Western Meadowlark is a bird of the open country, usually singing from a fencepost. The reason for its unusual species name is that John James Audubon thought it was neglected by birdwatchers, despite its beautiful song. It’s quite similar to the eastern species, although its vocalizations are different. The two birds do not interbreed and are not the same.

The Yellow-headed Blackbird is an attractive bird with its yellow head and black mask. Its body, wings, and tail are also black. You’re most likely to see it hanging onto cattails in a wetland, searching for seeds and insects. Its distinctive song is a mix of chirps and squeaks, sounding like rusty hinges. These birds sometimes become agricultural pests but not to the extent of other blackbirds.

Attracting Blackbirds to Your Backyard

Attracting blackbirds to your backyard isn’t hard. Simply put out a well-stocked bird feeder, and you’ll have no end of visitors, both welcome and unwelcome. It’s worth mentioning that several blackbird species are agricultural pests. Some are also predators. These birds are also not the neatest of eaters. If you put up a feeder, we suggest getting hulled seeds.

Remember that it’s a commitment once you start, especially during the winter. Your avian visitors will depend on the food you provide them. We suggest cleaning the feeder at least once a week. Check it often for moldy seeds to prevent disease. Putting out a birdbath will help ensure they have plenty to drink, too.

Blackbirds are some of the most fascinating birds you’ll see in the wild. Many are adaptable with their diet and habitat to ensure their continued presence in the wild. Minnesota is fortunate to have 14 species that you can easily add to your life list. Fortunately, many are used to humans, allowing you to get close to spot them.

About the Author Chris Dinesen Rogers

Chris has been writing since 2009 on a variety of topics. Her motto with all of her writing is “science-based writing nurtured by education and critical thinking.” Chris specializes in science topics and has a special love for health and environmental topics, and animals of all shapes and sizes.

What’re the Differences Between Buzzards and Vultures? (With Pictures)

9 Types of Blackbirds in Georgia (With Pictures)