For the purpose of this review, we chose to contrast the 8×42 model of each type. After diving into these two great sets of binoculars, we’ve been able to discern the subtle differences between them. You’ll have to decide for yourself which set suits you best, but we’re here to help by breaking down the differences in spec and performance.

Vortex is known for making some of the best binoculars around. Two of their most popular binoculars, he Crossfire and Diamondback, look very similar, though they stand at different price points. Is the Diamondback worth the extra price, or could you be just as satisfied saving your money on the Crossfire?

Quick Rundown of the Vortex Crossfire

The Crossfire is slightly heavier and bulkier than the Diamondback. The price point on the Crossfire series is a clear winner, with a savings of $50 to $100 on the comparable Diamondback models. For most users, the savings will be worth more than the minimal performance gains you’d see by upgrading to the Diamondback.
Crossfire Pros
Crossfire Cons

Overall, the more expensive Diamondbacks are a higher quality set. They’ve got some features that make them more rugged and durable, so they’ll hold up better in extreme conditions. Moreover, they’ve got the larger field of view, they’re smaller, and lighter as well.

But that doesn’t mean that you should discount the Crossfire. Though the Diamondbacks have slightly better specs, the differences aren’t staggering by any means. But the price difference is. For most enthusiasts, the specs and performance provided by the Crossfire are more than adequate, with a cost savings that make them a very appealing option.

Quick Rundown of the Vortex Diamondback

What are the differences between them?

At the end of the day, performance is the most important aspect of any pair of binoculars. Regardless of how light, durable, or attractive they are, if they don’t allow you to clearly see distant subjects, then they’re not much good.

Both of these binoculars are solid performers, but the Diamondback has a leg up on the Crossfire. Let’s start with the close focus distance.

The Diamondback binoculars have a close focus of five feet, while the Crossfire has a slightly longer close focus of six feet. A few years ago, you’d be hard pressed to find binoculars that could focus within ten feet, so both of these models are doing good. Still, if you need to focus on something close by, such as a butterfly, the Diamondback wins.

The field of view measures how wide of an area you can view at a certain distance, usually measured to 1,000 yards. In this case, the Diamondback has a 330-foot field of view, while the Crossfire has a field of view that spans 325 feet. This isn’t a major difference by any means, but the Diamondback still takes the win, albeit, slightly.

Which binoculars will hold up better? Both are built tough enough to withstand impacts and recoil, so it’s a hard call. In the end, the Diamondback will win due to the Argon purging. But, what is Argon purging?

To make binoculars resistant to water and weather, the lenses and seals are purged with gas. Often, nitrogen is used, like in the Crossfire. This is a perfectly adequate method of purging and weatherproofing, but it’s not optimal.

Argon purging is much more expensive, hence, the higher price on the Diamondback binoculars. But it’s also more resilient because argon molecules are larger than nitrogen molecules. This makes it easier for nitrogen molecules to leak out after an impact, thereby reducing the level of weather-resistance provided by the purging.

Though both of these binoculars look very similar, there are some design differences to account for. For instance, both are covered in a rugged rubber armor that protects against drops and impacts. But the Diamondback has more grip to help prevent a spill in the first place.

What is our favorite pair of binoculars for under $150?

What the Users Say

Now you’ve heard our opinions on these two binoculars, but we’re not the only ones who have put them to the test. To ensure you get a more well-rounded view of these products, we scoured the internet, searching through reviews, forums, and more to get the opinions of other people who have been using these binoculars out in the field. 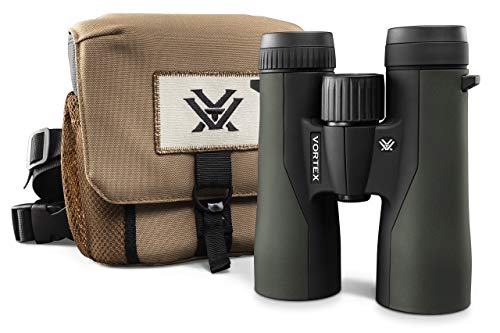 Most users seemed impressed with the overall build quality of both pairs. Many reported dropping their binoculars with little consequence. We don’t recommend testing it out, but they’ve been shown to withstand drops from varying heights.

When it comes to the overall viewing experience, many users reported no difference between the models. But this is likely due to their untrained eyes. Some of the most experienced users were able to pick out the difference visually. These users noticed slightly clearer images with less chromatic aberration from the Diamondback.

Many users seemed to prefer the more compact size of the Diamondback, particularly if they’re using the binoculars in remote locations that require wearing them around the neck for long periods. The extra size and weight of the Crossfire start to add up after many miles. Wisely, Vortex has a branded shoulder harness designed to accommodate its binoculars.

The number one thing reported by users of both binoculars was that the price difference didn’t equal out to the difference in performance. These users seemed to think that the Crossfire offers better bang for your buck, even if the Diamondback provides sightly better performance.

In the end, you really can’t go wrong with either of these binoculars. They’re both high-quality sets of moderately-priced binos that will provide you with many years of great performance. Still, you have to choose one, so let’s break it down.

The Crossfire is the better choice for most enthusiasts. The lower price is more comfortable for most wallets, especially when you consider the minimal performance gains on the higher-priced Diamondback. With the Crossfire, you’ll get rugged armor and protection, adequate weatherproofing, and very solid optics.

But there’s no doubt that if performance is more important than price to you, you’ll want the Diamondback. This pair is smaller, lighter, and has a slightly better viewing experience. It’ll provide better low-light performance and superior weather-resistance thanks to the argon purging. If you count on your binos daily, then the Diamondback is worth the higher price.

New posts from the blog:

Telescope vs Microscope: What’s the Difference?