17 Common Types of Sparrows in Pennsylvania (with Pictures) 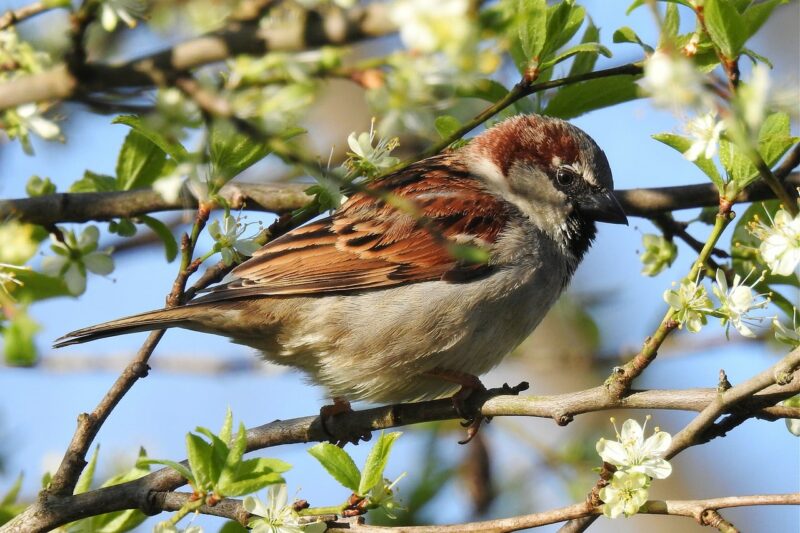 Pennsylvania is great for bird-watching Sparrows because many varieties come and go throughout the year. Each sings a different song and has various colors. So, if you are looking for new birds to find, keep reading, as we provide you with a list of Sparrows common to the Keystone State.

The 17 Types of Sparrows in Pennsylvania:

The Song Sparrow is easy to find in many northern states, including Pennsylvania. Most birds will stay around all year, but some may migrate to Canada. They eat a wide variety of insects, including beetles, earthworms, and spiders, but they also like sunflower seeds and fresh fruits.

The House Sparrow is an introduced species not native to Pennsylvania. However, it has adapted well to the climate and currently lives in the state all year. It has a gray and brown head with white cheeks and a black bib. As the name suggests, you usually find them around houses and buildings, and they can be quite friendly toward humans.

The Savannah Sparrow is an attractive bird found in Pennsylvania from April until November. Its body has colorful brown streaks, and there’s a yellow patch by the eye. It usually eats insects and spiders when available but will switch to a backyard feeder when the weather gets cold.

The Chipping Sparrow is a slender bird that has a long tail, a rusty brown crown, and a dark streak that runs through the eyes from the beak to the back of the head. These birds usually visit Pennsylvania during the breeding season in the summer and will head south again before winter arrives. They tend to hang out on the ground in small flocks for increased protection while they forage.

The Eastern Towhee is a Sparrow with a long tail. Its head is black, and there are rusty highlights on the side of the belly. These birds usually stay in Pennsylvania from April through October, and they’re about the size of American robins.

The Field Sparrow is a variety that you will likely find in Pennsylvania from April to October, though many birds will stay throughout the year. It enjoys visiting backyard feeders looking for black sunflower seeds, millet, and cracked corn. It’s a small and slender bird, with a streaky pattern on the back and a long tail.

The Grasshopper Sparrow is one of the smaller varieties on this list, and it has a distinctive orange or yellow stripe above the eye. It prefers a warm climate and many bird watchers report seeing it from May until July. You will usually see it hopping along the ground, foraging for insects or seeds.

Henslow’s Sparrows have a greenish face and reddish back. It prefers wet, dense grasslands and usually chooses to run through the grass to escape danger instead of flying. It eats insects but also enjoys ragweed, smartweed, and other seeds.

The Dark-Eyed Junco is a winter bird that’s easy to spot from October to April, though some may remain in the area all year. It has a dark gray body with black eyes and enjoys foraging on the ground for seeds, but it will also eat insects if it finds them. Since these birds are often the first to arrive in winter, many people call them snowbirds.

The White Throated Sparrow is easy to spot throughout winter due to its white-and-black striped head and brown back. It mostly eats grass and seed, but it also likes fruits and insects. The females usually build the nests and lay up to six eggs, which take about 2 weeks to hatch.

The American Tree Sparrow is a winter bird that can start arriving in Pennsylvania in August and will usually stay until April or May. It has a long tail, a rust-colored cap, and a gray face. It typically breeds in Canada during the summer months and migrates south to Pennsylvania when it gets colder.

Swamp Sparrows are easy to spot in Pennsylvania, as the birds migrate through the state in early spring and late fall, with a few deciding to stay all year. It has a dark brown back, rusty-colored wing highlights, and yellow around the beak. These birds like to stay by the water where there are plenty of insects, and they will also eat seeds and fruit from backyard feeders if they stop during the migration.

The White-Crowned Sparrow is another bird that you can see as it passes through the state while migrating. It has a long tail and an orange beak. The head is gray with white-and-black stripes. If you have a feeder packed with black sunflower seeds, one or two might stop as the birds migrate over your home.

The Fox Sparrow is usually gray or dark brown, with a pointy beak and long tail. You can spot it in Pennsylvania as it migrates north and south. These birds prefer wooden areas with plenty of undergrowth and brush that can provide cover from predators and help them stay warm in winter.

The Lincoln Sparrow is another bird that you might see as it migrates through the state. Like many other Sparrows, it sticks to densely covered shrubs and thickets and prefers to eat insects like spiders and caterpillars when possible. It’s a secretive species that attempts to stay hidden, so you’ll need to learn its song to find one in the wild.

The Vesper Sparrow is one of the more rare varieties that you can find in Pennsylvania when it migrates through the state, with some birds only stopping to feed before heading south again for the winter. It prefers open grasslands and meadows, eating primarily grasses and seeds.

The Nelson Sparrow is a rare variety that you might see in Pennsylvania, and you’ll have to look carefully in October when they migrate. It has an orange head with a brown cap. The neck area is more yellow and the belly is grey. The males fly quickly just above the vegetation to attract a female’s attention when courting, producing an easy-to-identify short call.

Tips and Tricks for Viewing Sparrows in Pennsylvania

Many different types of Sparrows pass through Pennsylvania each year. Some stay put, while others will migrate north or south when breeding season approaches and again when it is over. If you are a beginner, choose a variety that you can see anytime, like the Song Sparrow, House Sparrow, and Savannah Sparrow. Once you gain experience, try to find one of the migrating Sparrows, like the Swamp Sparrow, Fox Sparrow, or Vesper Sparrow, for a tougher and more rewarding challenge.

About the Author Ed Malaker

Ed Malaker is a veteran writer who contributes to a wide range of blogs covering information on computer programming, pets, birding, tools, fitness, guitars, and optics. Outside of writing, Ed is often found working in the garden or performing DIY projects in the house. Ed is also a musician, spending his time composing music for independent films or helping people repair their guitars.

Blue Jay Eggs vs. Robin Eggs: How to Tell the Difference

Yellow Warbler vs. Goldfinch: How to Tell the Difference

Great Blue Heron Male vs. Female: How to Tell the Difference

10 Common Types of Sparrows in Maine (With Pictures)