11 Types of Blackbirds in Mexico (With Pictures) 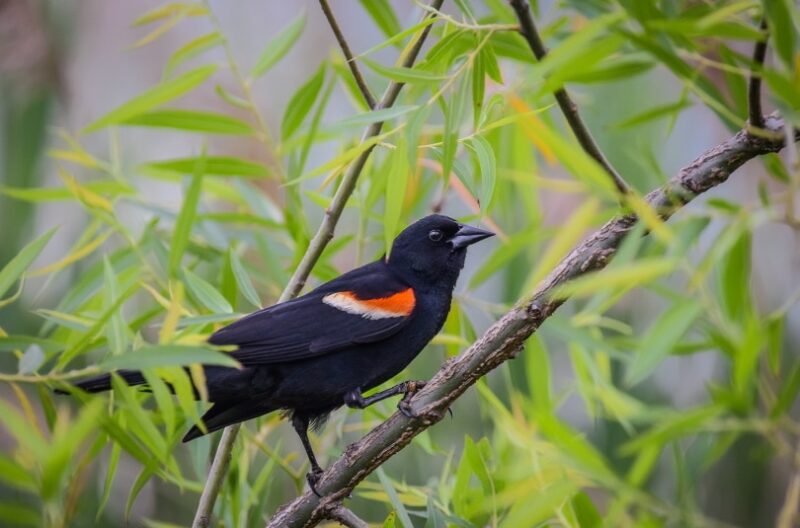 Just south of the United States sits the amazing country of Mexico, which, for many, is a birdwatcher’s paradise. Mexico has a wide range of ecosystems that are home to an incredible variety of bird species, including the topic of today’s article, the blackbird. Mexico is considered a “mega biodiverse” country with more bird species than the United States and Canada combined.

From the incredible Yucatan peninsula to Oaxaca, Nayarit, Sonora, Chiapas, and many more, Mexico has an abundance of avian species. If blackbirds are your favorite type of bird, you will thoroughly enjoy the information we’ve gathered for you below. Read on to discover the 11 types of Blackbirds in Mexico!

The 11 Types of Blackbirds in Mexico

You’ll find the Great-tailed Grackle all over Mexico, including rural, urban, and city landscapes. With its extra-long tail, it’s a hard bird to miss and has been extending its range northward for several decades. As with many bird species, the male Great-tailed Grackle is considerably larger than the female and more colorful.

They’re a beautiful, gloss-black color with a blue sheen on the back of their heads and part of their backs. That makes the Great-tailed grackle’s bright yellow eyes easy to spot. However, the dead giveaway is their tail, which has a keel shape (like a sailboat’s keel) and, in males, is particularly long. The tail helps differentiate between this species and the Common Grackle, but Common Grackles aren’t found in Mexico.

One of the easiest ways to to find a Yellow-headed Blackbird is to listen for their call as it sounds like an old, rusted gate being opened. As you might guess from their name, the Yellow-headed Blackbird has a yellow (some say golden) head, and the color extends down to its chest in the shape of a vest. Their bill is short and black, and the black color extends back to surround their eyes.

They also have a white streak on their mostly black wings. Yellow-headed Blackbirds get together in massive flocks, which can be very concerning (and noisy) for Mexican farmers. Typically, this species nests in reeds and shrubs directly above the water in wetlands, marshes, and prairies.

The Red-winged blackbird is one of the easiest blackbirds to spot in Mexico because they are practically everywhere (except in the desert). They gather in huge flocks near marshlands and anywhere there’s plenty of water and healthy vegetation. One interesting fact about Red-winged Blackbirds is that they’re polygynous, which means a male will have many female mates, sometimes up to 15!

What’s even more interesting is that, even with all of these mates, 25 to 50% of Red-winged Blackbird nestlings are sired by another male! Spotting male Red-winged blackbirds is relatively easy since they have a large, red spot and black body. Females of the species are notably different, however, and are mostly brown with brown and white feathers on their bellies; they look very much like a large Sparrow.

Few blackbird species raise their young like the Brown-headed Cowbird female. Typically, a female will lay up to three dozen eggs in a single breeding season, which is incredible. Even more impressive is that the female will place her eggs in the nests of other bird species and let the birds foster her chicks—much to the chagrin of the bird’s own chicks, who often perish. This is known as a “brood parasite,” and the species makes no nest of its own.

While the Brown-headed Cowbird was only seen in northern-central North America for decades, their range has extended dramatically as of late, and they can now be seen in the southern part of the United States, Mexico, and Central America. Their dark brown heads make the male Brown-headed Cowbird easy to spot, as well as their dark blue, glossy body.

The male Brewer’s Blackbird has bright, yellow eyes that are easy to spot on its amazing gloss-black body that’s tinged with dark blue and green. Females are much less colorful and mostly brown with black eyes. You’ll find Brewer’s Blackbirds in many towns and cities in Mexico and in medium-size flocks sitting in shrubs and trees. Look for them rambling along the ground, looking for crumbs and seeds when feeding.

The Brewer’s Blackbird is very social and often nests in colonies up to 100 strong. Scientists believe that the female’s variable egg color is a way to camouflage the eggs among different types of nesting materials. Sadly, even though they mostly eat insects, many Mexican farmers still trap, shoot and poison Brewer’s Blackbirds out of concern for their crops.

You will often spot Bullock’s Orioles hanging upside down in trees looking for insects and nectar. Both the male and female help each other make nests which can take up to 2 weeks to finish. One interesting behavior this blackbird species has is peeling the skin off caterpillars by repeatedly smacking them on branches. They also pull out and drop stingers before eating honeybees and eat a wide variety of insects, including stink bugs, treehoppers, spiders, ants, and beetles.

Spotting the male Bullock’s Oriole is usually relatively easy since its body is a vivid flame-orange color with black and white wings. The species is found throughout Mexico and has a sweet song that both male and female birds sing. However, you’ll find that female Bullock’s Orioles sing much more often than males.

The Baltimore Oriole might be the mascot of a Major League Baseball (MLB) team in the United States, but you can spot them all over the eastern parts of Mexico. Spotting them is simple since the male Baltimore Oriole’s body is a brilliant orange color with a jet black head and black wings with white stripes. The female Baltimore Oriole is also quite striking, although its body is a duller orange that extends over its head.

This blackbird eats plenty of insects but loves fruit nectar and will hang upside-down for extended periods to get it. Interestingly, they prefer only dark-colored, fully ripened fruit, ignoring lighter-colored fruits completely. The birds use “gaping” to get fruit nectar. They stab their beak into a ripe piece of fruit, and when the hole is large enough, they use their tongues to drink the nectar inside.

The range of the Eastern Meadowlark extends down into Mexico and Central America. This species is known for its delightful songs that resemble a flute. Eastern Meadowlarks have over 100 song patterns and an immense vocabulary. Males will usually have two mates, and they gather together with others to form flocks of up to 200 birds.

The easiest way to spot an Eastern Meadowlark is to look for its bright yellow chest with a jet-black chevron across the upper part, right under its neck. Also, look for their tan feathers with brown stripes. They also have unusually long legs for a blackbird, with long toes. Spotting the birds on the ground can be difficult since their flight feathers provide excellent camouflage.

One of the most notable features of the Bronzed Cowbird is its short, stocky neck. If the light is good, the bird’s upper feathers shimmer a deep, glossy blue. This brilliance extends to their black body, which, in the right light, has a bronze sheen that looks similar to velvet. Like the Brown-headed Cowbird, the Bronzed Cowbird is a brood parasite that lays its eggs in the nest of other birds and forces the unsuspecting birds to raise their young for them.

In Mexico, you’ll find the Bronzed Cowbird gathering near grain silos on farms, where they take advantage of spilled grains. While they were primarily found in Mexico until around 1950, the Bronzed Cowbird has extended its range further north and can now be found in parts of Louisiana, Texas, New Mexico, and Nevada, USA.

The Hooded Oriole stands out for several reasons; it has an extra-long tail and a deep-orange head and chest. The male’s bill and neck are jet black, as are its flight feathers, although the latter are interspersed with white streaks. Female Hooded Orioles are a beautiful light orange but lack the jet black neck and bill, and they also have tan and white feathers instead of black and white.

What’s unusual about the Hooded Oriole is that they sew their nests, usually under the fronds of palm trees. This nesting tactic helps them to hide while nesting and keep their chicks safe. Like some blackbirds, the Hooded Oriole is also fond of hanging upside-down while feeding from fruits and hummingbird feeders. Spotting them can be difficult because Hooded Orioles rarely comes out of hiding to show themselves.

The European Starling was brought to North America in the 19th century by Shakespeare devotees. Today, the European Starling is considered one of the most numerous blackbirds in North America and Mexico. While attractive, some find them less so than their blackbird cousins. Also, many find them more annoying since they are aggressive and flock in huge, noisy numbers.

You’ll find European Starlings in most of Mexico’s towns and cities, especially in parks, open fields, and large lawns. When they fly together, their flocks are so large they can temporarily darken the sky, and the European Starling can reach flying speeds up to 48 mph!

Mexico is a land rich in birds of all species, and the blackbird family is well represented, as we’ve seen today. The 11 types of blackbirds we’ve marveled at all have different traits, breeding habits, and so forth, but all share a common love for insects, large flocks, and beautiful plumage. In some cases, their plumage is spectacular, making them stand out easily when birdwatching.

Some, however, can be a nuisance, especially the non-native European Starlings. We hope you thoroughly enjoyed today’s list of the 11 types of blackbirds in Mexico and enjoyed the beautiful photos. If you’re traveling to Mexico, we wish you the best of luck spotting your favorite blackbirds!

About the Author Greg Iacono

Greg Iacono is a self-taught writer and former chiropractor who, ironically, retired early due to back problems. He now spends his time writing scintillating content on a wide variety of subjects. Greg is also a well-known video script writer known for his ability to take a complex subject and make it accessible for the layperson.

Do Loons Mate for Life? The Interesting Answer!

How Long Can a Loon Stay Underwater? The Surprising Answer!

Do Swans Mate For Life? (What You Need To Know)

Where Do Loons Go in the Winter? The Interesting Answer!

18 Types of Black Birds in Washington (With Pictures)