Reflector vs Refractor Telescope: Which is Better? 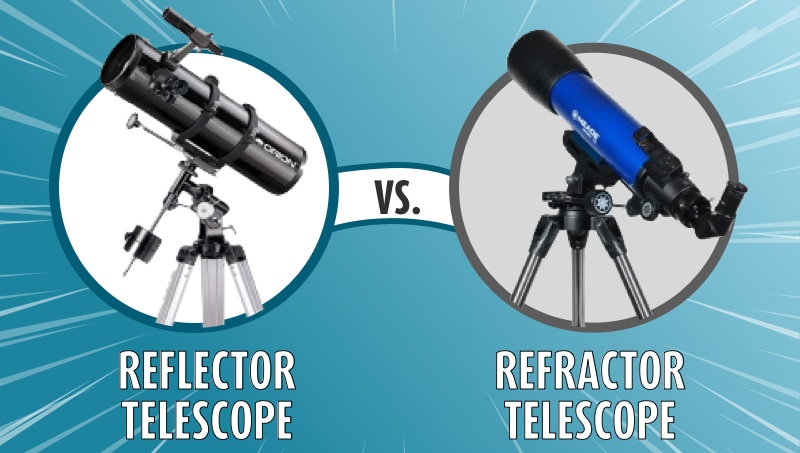 If you’re just getting into astronomy, the sheer amount of technical information you need to understand can be overwhelming. Just trying to determine which telescope to buy can seem like a complex puzzle. Reflectors, refractors, and even Schmidt-Cassegrain all seem similar, so how can you choose between them?

Though they seem similar on the surface, these telescopes have some notable differences that will make the decision easier once you understand them. To help you, we’ve compiled all the necessary information about these telescopes so that you can get a better understanding of what they are, how they work, and which one will suit you best.

The first reflecting telescope was built way back in 1668 by none other than Isaac Newton. We still use a similar version of a reflector telescope today because they’re very cheap to build and produce. Because of this, these telescopes heavily populate the entry-level market.

But that doesn’t mean that they’re not good. These telescopes are excellent tools and can provide a detailed view of distant heavenly bodies. Don’t discount them because the design is old and they can be built cheaply. This design is still in use because it is so effective.

How Does It Work?

As the name implies, reflector telescopes reflect the image using a series of mirrors. The main mirror, called the primary mirror, sits at the very back of the telescope. Light comes in through the front of the optical tube and shines down until the primary mirror reflects it forward from the back. 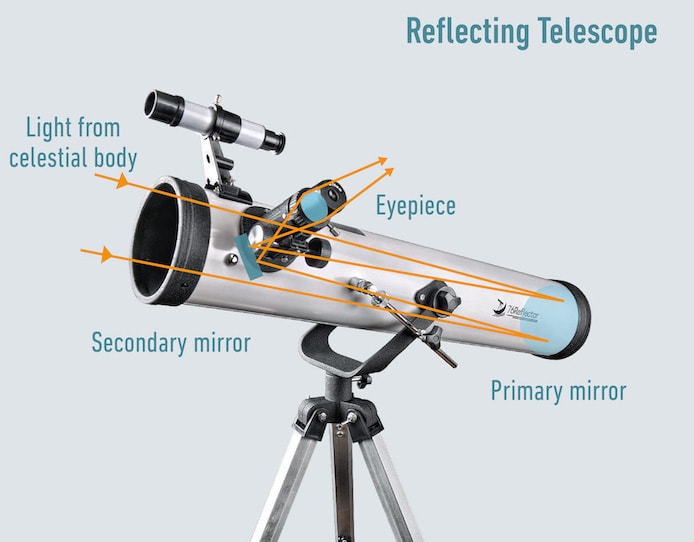 The front-placed eyepiece is one of the defining characteristics of a reflector telescope and makes it easy to tell them apart from other types of telescopes at a glance.

These are also the best choice for many beginning astronomers. Some telescopes can be wildly expensive, but since reflector telescopes are much cheaper to make than most other types, they’re often quite affordable and make a good starting point.

Reflector telescopes use two mirrors and an eyepiece. But those mirrors need to be aligned with each other each time you use the telescope in a process called collimation. If you skip this, you might not get a clear or sharp image.

Also, the optical tube of a reflector telescope is wide open. This means that dust, dirt, and other contaminants can easily get inside, so you’ll have to continually clean the mirrors and optical tube. 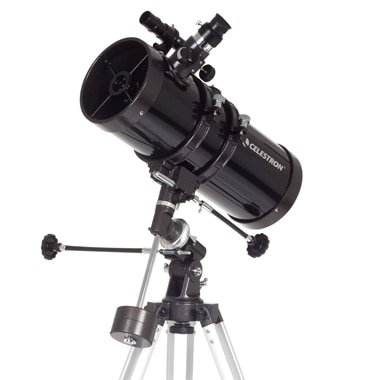 On the bright side, because nothing is hindering the light and the reflector telescope uses a large primary mirror, they let in more light than other types of telescopes, allowing for viewing in less-than-ideal conditions.

For a perfect image, you’d need a hyperbolic primary mirror in a reflector telescope. But these are expensive, so only the highest-quality telescopes employ them. Most will use a cheaper parabolic mirror or the cheapest spherical mirror instead. While these can make more affordable telescopes, they also have lower optical quality and can introduce coma aberration and other image-degrading effects.

In a reflector telescope, magnification is taken care of by the eyepiece. This enables you to purchase additional eyepieces with varying degrees of magnification. Then, you can easily and quickly swap them out to change your view. 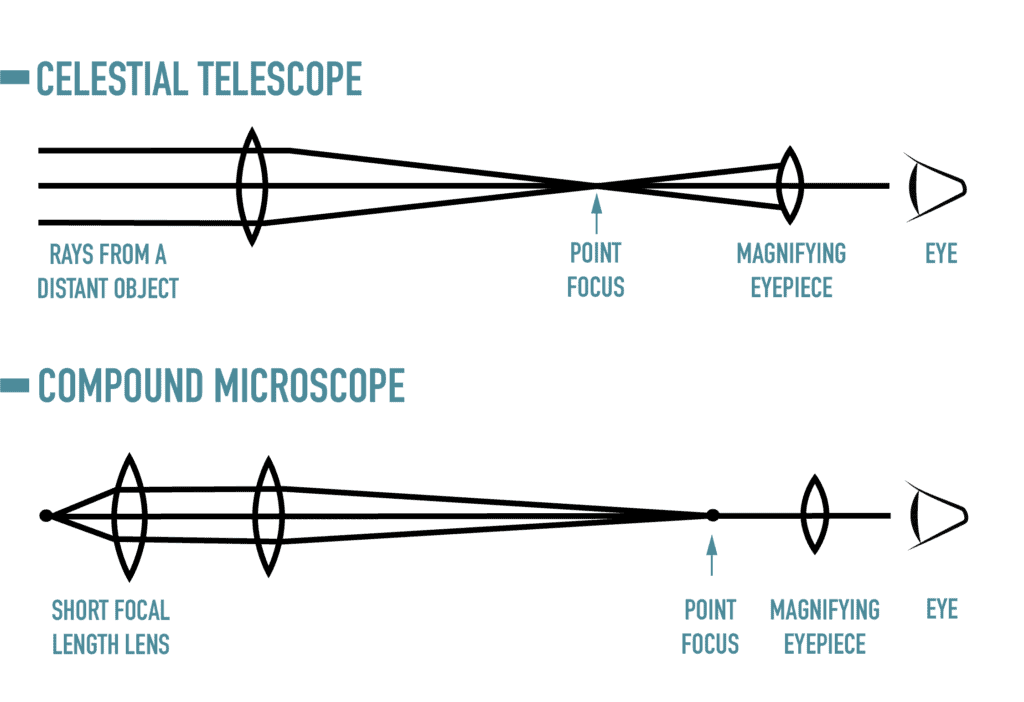 Remember, a smaller focal length gives a wider field of view allowing you to see more of the heavens but at less magnification. A longer focal length will let you see a more detailed close-up of a smaller area.

The eyepiece is where you look into your telescope to see an image. But you don’t press your eye right up to it. Instead, you’ll hold your head a short distance behind the eyepiece so you can see the entire image and get it all in focus. This distance is referred to as eye relief. 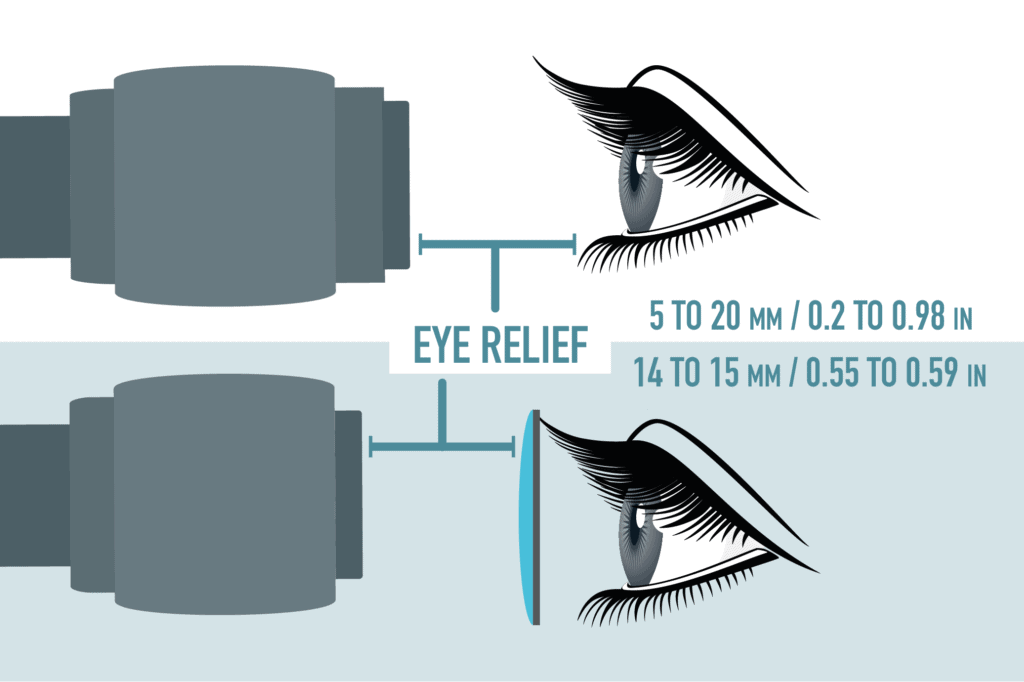 Thankfully, the eyepieces on a reflector telescope are interchangeable. You’ll be able to change them out with eyepieces that work best for you. That could mean more magnification or less, a larger eye relief for those who wear glasses or a smaller exit pupil for those will smaller pupils.

You can find reflector telescopes with varying fields of view. But within your telescope, you’ll be able to adjust the field of view somewhat by changing eyepieces.

The number one upgrade or modification for reflector telescopes is the eyepieces. Yours may come with one or two eyepieces with different levels of magnification, but if you want more control over the image you’re seeing through your telescope, then you’ll want to add to your collection of eyepieces.

Additional eyepieces can give you more magnification options, different fields of view, and even a smaller or larger exit pupil if needed.

Refractor telescopes haven’t been around quite as long as reflectors. They’re a sealed design so they are less susceptible to dirt and debris. They also don’t need as much adjusting and never need collimation like a reflector telescope. Likewise, they’re smaller and more compact than reflector telescopes, making them a great choice for astronomy on-the-go.

How Does It Work?

Refractor telescopes have a large lens on the very front. This lens is convex, taking in light and refracting or bending it into a smaller beam of light that gets sent back to another lens at the rear of the telescope. 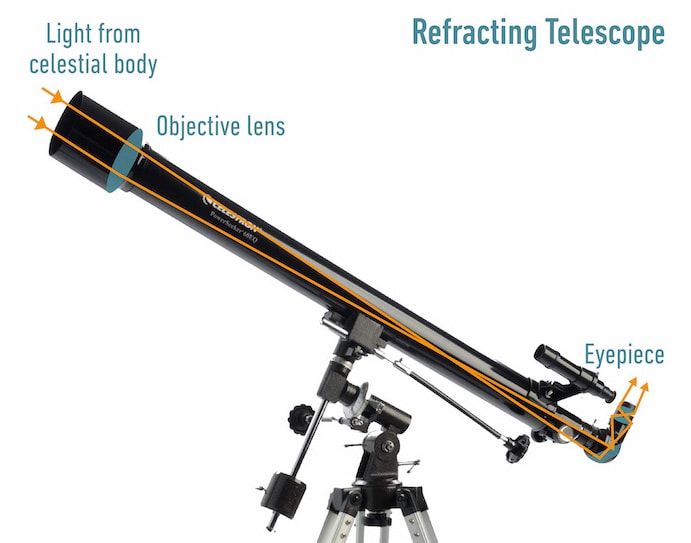 This lens, also convex but facing the other direction, takes the smaller beam of light and magnifies it so that you can get a large, clear image.

Since they’re also smaller, they’re better for anyone who doesn’t always do their viewing from the same location.

RELATED READING: Top 8 Things to See with a Small Telescope

But the problem is that not all the colors of light refract at the same rate. This means that the light colors are reaching the secondary lens at different rates, causing chromatic aberration. You’ll see this as fuzzy colors and colored rings around celestial bodies. 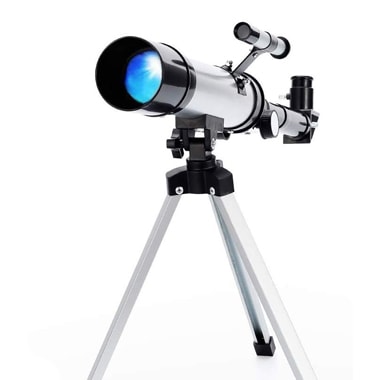 Special lenses have been made to combat this issue, but they can be extremely expensive. Luckily, it’s not as big of a deal on smaller-aperture telescopes like the ones most people purchase for home and hobby use. 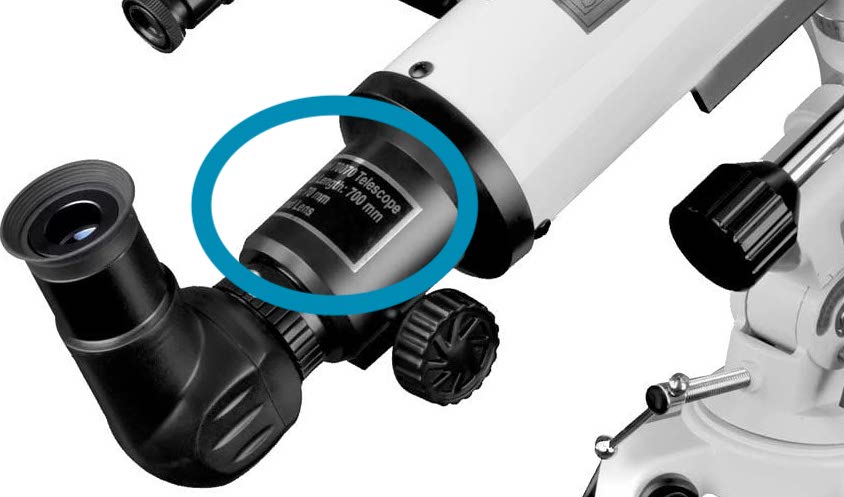 If you want to get a wider field of view, you’ll want a telescope with a shorter focal length. This will also make for a very compact telescope. But if you want a more detailed view of the celestial bodies you’re observing, then a longer focal length is a good bet. This will provide more magnification but will also result in a larger telescope overall. Still, you can have a smaller refractor telescope with more magnification than a reflector telescope that’s larger.

The eyepiece on a refractor telescope is at the very rear of the device. This can change the way you view the telescope since you have to be behind it and likely seated in order to use it. 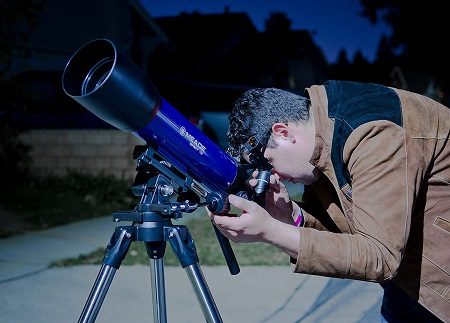 Though there’s not much difference in eye relief between reflector and refractor telescopes, there is a lot of difference between eyepieces. If you wear glasses, you’ll need to make sure you find an eyepiece with large enough eye relief for you to view comfortably without your glasses hitting the eyepiece.

Like with reflector telescopes, the most important modification to your refractor telescope is the eyepieces. Additional eyepieces can open up doors for you as you expand your view of the heavens.

You can also upgrade your tripod to one that smoothly moves and follows the trajectory of planetary orbit. If you really wanted to go all out, you could even upgrade to a computerized mount that’s able to locate and track celestial objects for you with the push of a button.

What is a Catadiotropic (Schmidt-Cassegrain) Telescope?

Both reflector and refractor telescopes have their strengths and drawbacks. To get the best of both worlds, mirrors and lenses were combined in the Schmidt-Cassegrain telescope. 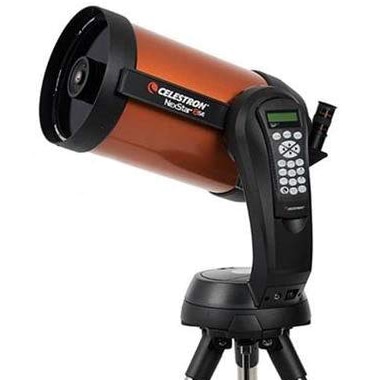 There are several advantages to this type of telescope. First, because the light is traveling so far, being reflected multiple times, the Schmidt-Cassegrain telescope has a very long focal length in a compact tube. That’s why these telescopes are favored for astrophotography.

Plus, it mainly uses cheap-to-produce mirrors instead of expensive lenses. This means you can avoid the chromatic aberration of many refractor telescopes and get high levels of magnification in a compact package thanks to the long focal length.

When to Use a Reflector

Reflectors are great for viewing large and close heavenly bodies like planets and other objects within our solar system. They’re also great starter telescopes because of how affordable they often are. But keep in mind, you’ll still need to collimate the mirrors and that can be a bit tricky until you get it figured out. 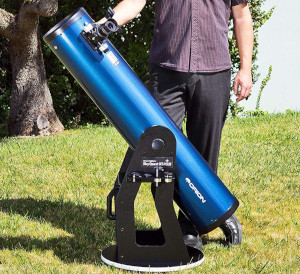 When to Use a Refractor

Refractors offer higher magnification in a more compact package. They’re the better choice for when you want to observe on the move and take your telescope with you. They also don’t need to be collimated and require less maintenance and cleaning, so they’re best if you just want to observe and don’t want to mess with the extra work. 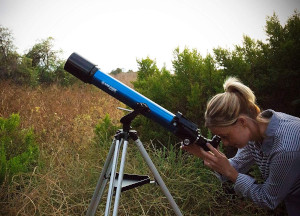 Don’t forget the extra work that’s involved with a reflector telescope. You’ll have to collimate the mirrors every time you set it up. Plus, you’ll need to clean those mirrors because of the open-tube design. Refractors don’t have the same maintenance requirements.

When you’re just getting started with astronomy and don’t know if you’re going to stick with it or not, you might be looking for the cheapest option to get you started. In that case, reflector telescopes are generally the way to go. Because they’re made with mirrors instead of lenses, they’re inexpensive to make and you can usually get a solid product very affordably.

Looking for a reasonably priced telescope? We have you covered! Check out some of our latest guides to buying a new telescope:

So, which is the right choice for you? If you plan on mainly viewing the moon and other large and close space objects within our solar system, the reflector telescope is a great choice. It provides good image quality for the price and they can be very affordable, which also makes them great for beginners.

For viewing deep-space objects, the refractor telescope is a better bet. You’ll also get more magnification in a smaller telescope with refractors. Plus, they don’t need collimation every time you set one up and they require less maintenance. But they’re more expensive as well and the cheaper ones usually have poor image quality.

If you want a compact telescope that provides a long focal length and high image quality at an affordable price, you might skip both and take a look at Schmidt-Cassegrain telescopes instead.

Vortex Viper vs. Razor Spotting Scopes: Which Is Better?