How to Sight in a Red Dot Scope Without Shooting 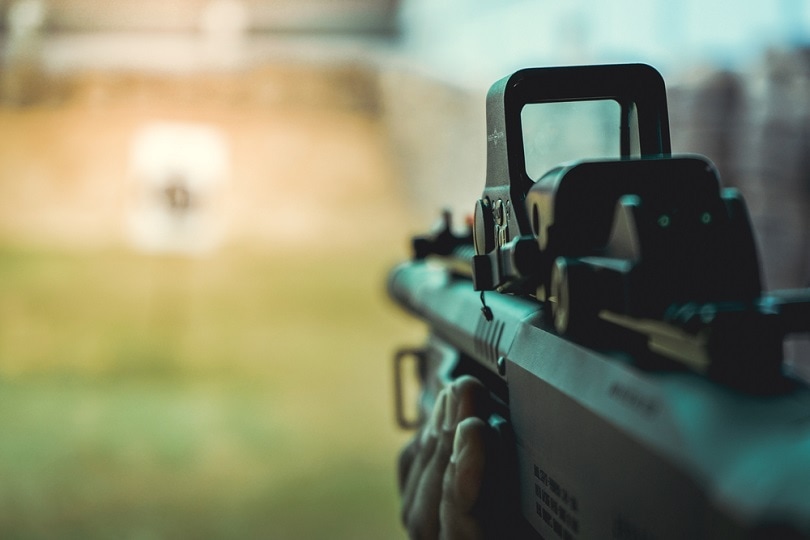 Strictly speaking, you can’t “sight in” your scope properly without doing at least a little bit of shooting. There are ways you can get it fairly close, but if you want to be accurate within an MOA (1 inch at 100 yards), you simply will not be able to do it without actually firing rounds and seeing where they hit, unless you get really lucky.

All that being said, you can do a process called “bore sighting” to get your red dot fairly close. In fact, many experienced shooters will bore sight their rifle first before fully sighting it in to save them some time and money firing a bunch of rounds just to get on paper. As long as your expectations are in line with what’s possible when bore sighting, then you can be good to go.

Bore sighting does not give you results that are as precise as the actual process of sighting in your rifle. We’ll go through the full process down below, but first, we’ll talk about how to bore sight. It may seem like bore sighting should be highly accurate, and if you were only shooting a yard or so away from the barrel it would be incredibly precise.

You’re not just shooting a yard away, though. You are likely wanting to shoot between 50 and 100 yards away, and a minor imperfection in the way the laser fits into the barrel (or chamber) will still make a big difference over that much distance. Not only that, the inside of a rifle barrel is somewhat unique and can send the bullet off at a slightly different trajectory than the laser would predict.

Long story short, bore sighting is a relatively quick and dirty method of getting more accuracy than you have when you first mount the scope. It is not a replacement for sighting in your scope properly, but it can be a good temporary measure until you’re able to get to a range. 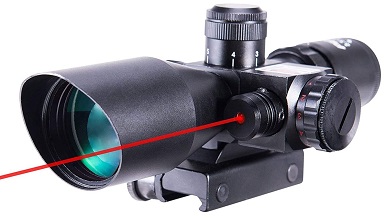 You’ll obviously need your gun and your red dot already mounted on it, but you’ll also need a bore sight. This is just a laser pointer (albeit a powerful one) that either goes into the end of your barrel or into the chamber and shoots a laser out.

The bore sight will be the same diameter as the round the rifle is chambered for, so the fit should be fairly snug and give a reasonable approximation of where the point of impact will be.

You will also need a target between 25 and 50 yards out. Any further than that and there’s no way you’ll be able to see the laser through just a red dot. If you are sighting in a scope with magnification it would be a different story.

Insert the bore sight into the rifle based on what kind of bore sight it is. The cheaper the bore sight, the less snugly and precisely it will fit, so if you’re relying on this to get your rifle sighted in without any shooting, you would do well to pony up the big bucks for a high quality bore sight. If you just want to get on paper, a cheap one will get you started.

Decide if you’re zeroing at 25 or 50 yards and set up your target accordingly. This is important because your red dot will only be accurate at the distance you zero and you’ll have to compensate when aiming at something closer or further away. Once you’ve got everything set up and mounted, you can insert the bore sight into either the end of the barrel or the chamber.

Once in, you may not have a lot of battery life since the laser has to be quite powerful to be visible at those distances in daylight. Get your rifle on target using the laser while ignoring the red dot sight at first. Once you’ve got the laser on the center of the target, it’s easiest if you can find a way to secure the rifle without you having to hold it. Sandbags, clamps, even a stack of books can help with that.

Whether you’re holding the rifle with one hand or have it secured, the next step is to use the windage and elevation adjustments on the red dot to move the reticle over to lay on top of where the laser is hitting. Most red dots require some kind of tool to adjust like a coin or flat head screwdriver and you may need to adjust it quite a bit to get it to line up. 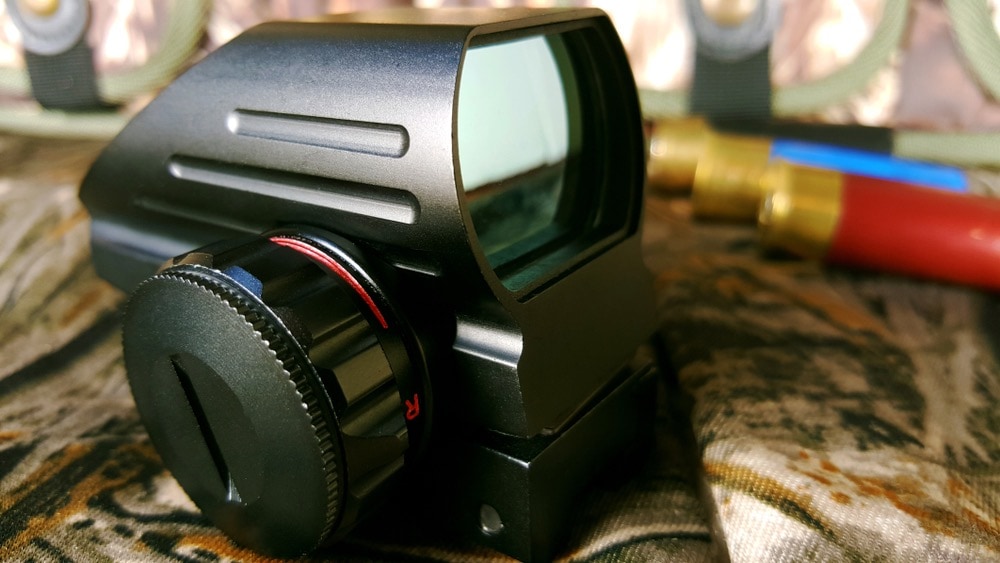 Once you’re there you’re good to go. If you want to zero at 50 yards, it can be helpful to first bore sight the rifle at 25 yards to get closer, then move out to 50. This makes it easier to get on paper at a longer distance.

With a high quality bore sight and a little patience, you can get your red dot reasonably close to being sighted in without having to fire a single round. However, having a sighted optic is only part of what brings a shooter accurate and consistent results; you also have to practice with your optic.

If you don’t have any practice shooting with your optic, you won’t be able to get the performance out of it that you want when it matters the most. Getting within a couple of MOA of center on your zero is all well and good, but if you aren’t familiar enough with your sight to quickly acquire your target and do small compensations on the fly then it may not matter.

As mentioned before, you also simply cannot get a proper zero with just a bore sight. Bore sights don’t fit perfectly, and there’s no way to account for all the variables that can affect a bullet’s trajectory without actually shooting the gun.

Bore sighting is certainly better than no sighting at all, and you can get your sight to a solid level of functionality through the process of bore sighting.

Other Types of Bore Sighting

All we’ve discussed in this article is laser bore sighting because if you want to get as close as possible to zero without actually shooting the rifle, your only bet is to use a laser. That said, if you are using a bolt action rifle, you can remove the bolt and look with your eye down the barrel and then adjust the red dot so the dot is showing where the barrel is pointing.

You can do the same thing with a semi-auto, but it’s a lot more involved. There are also bore sights that can be mounted on the end of your gun that you can line your dot up with so that your dot is at least pointed in the same basic direction as the barrel. 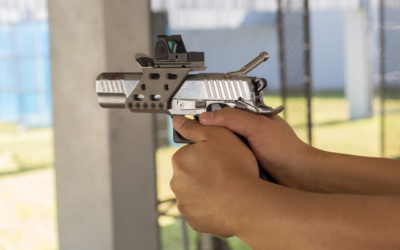 When You’re Ready to Shoot

As soon as you’re able, you can take your bore-sighted rifle and sight to the range and finish the zeroing process. At this point, all you have to do is take shots at a target that is the right distance away and see where your grouping is hitting when you’re lining up your reticle on the center of the target. Start with at least three shots, and maybe five if your grouping isn’t very tight.

Figure out where the groupings are centered around and measure the distance from that center point to where you were aiming and adjust the red dot enough to where it should be on center. Then simply repeat the process, shooting three to five shots in a group and adjusting the red dot until your groupings are on the center of the target.

Bore sighting prior to shooting can make this process much faster, and save you money on ammunition and time at the range that you can then use to do some more interesting things instead.

There’s a little bit of investment involved with bore sighting your new sight unless you already have a bore sight, but the investment can be well worth it. If you need to get your sight to a certain level of accuracy and you’re not able to take it out to a range and shoot it, then bore sighting can be a way to get closer than you otherwise could.

Even if you are planning on fully sighting in your scope, bore sighting is a great first step and a way to get much closer without having to expend a bunch of rounds just getting your shots on paper with your new scope. Red dots are faster and easier to sight in than scopes with magnification since you’ll be shooting at targets that are much closer than 100 yards.

The idea here is to show the picture through a red dot sight and show the laser hitting in a different spot than the dot reticle.