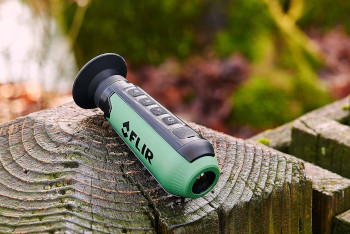 Thermal Monoculars are a big investment, but people often don’t put enough thought into their purchase. Instead, they buy from the same brand they’ve used before, even if the new model isn’t as good as their old one or try to get the best value by purchasing the most expensive model, even if it’s not the best one on the market.

It’s also not easy to shop online. It can be hard to tell what’s a real selling point and what’s just marketing fluff. That’s why we’ve assembled this list of reviews of some of the best thermal monoculars of 2020. We’ve given a lot of thought as to how you can get the best bang for your buck and want to help you find the model that will be the best one for you.

We’ve also created a buyer’s guide, so if this is your first time shopping for thermal monoculars, you can get up to speed with some of the features that you should be looking for when you shop.

Our Favorite Choices for 2020: 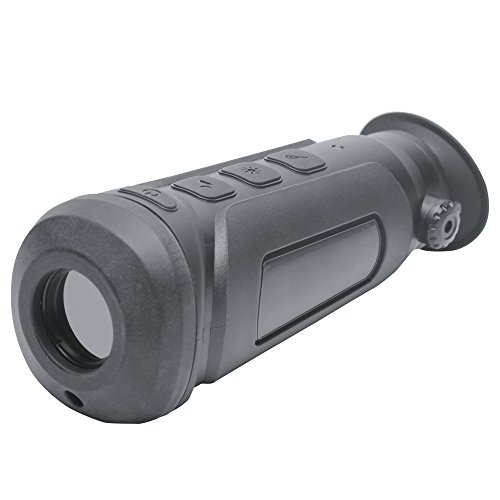 The P2M Firestorm 1-4×19 is our top choice for thermal monoculars. It comes with a display with a 384 x 288 resolution, which is among the best you can find on any thermal monocular. It also has an excellent 550-yard detection range, which gives you the ability to see without being seen. This model has three different color palettes, allowing you to customize the experience to the one that works best for you, whether that’s black hot, white hot, or red hot.

It also comes app-ready. You can use this model as a stationary camera and via wifi, view what it sees on the IR Tracker app. This feature makes this model extremely flexible, good for hunting or security. One nitpick with this model is that it can’t be manually focused, which means that anything closer than 10 feet will be a bit blurry, though it does a good job automatically focusing between 10 feet and its maximum 550-yard range. Overall, this is the best model for someone who wants a thermal monocular that will do most of the work and has a ton of nice features to boot.

Overall, we think that this is the best thermal monocular of 2020. 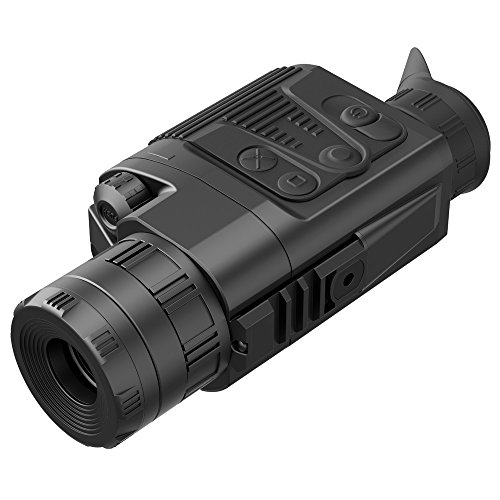 The Pulsar Quantum Lite Thermal is our runner-up on our list. It features good resolution that will enable you to see animals at least 200 yards away, and through dense foliage as well. It’s also designed to make that task easier, as it comes with city, forest, and identification viewing modes, which shift the way it detects heat signatures to deliver crisp thermal images in different settings. And, it’s great for fast-moving animals or objects, since the screen refreshes 50 times on a second, which is on par with a television screen in some parts of the world.

A nice touch is a fast startup, which means that this thermal monocular is ready to go in just two seconds. It also comes with manual, automatic, and semi-automatic calibration modes, which means that you don’t have to figure out which settings to use if you don’t want to, but that you also have the option to fine-tune this monocular when you need to. What ultimately keeps this model out of first is its use of AA batteries instead of a rechargeable battery, which raises the cost of operation. Overall, this is a great model with a price tag to match. 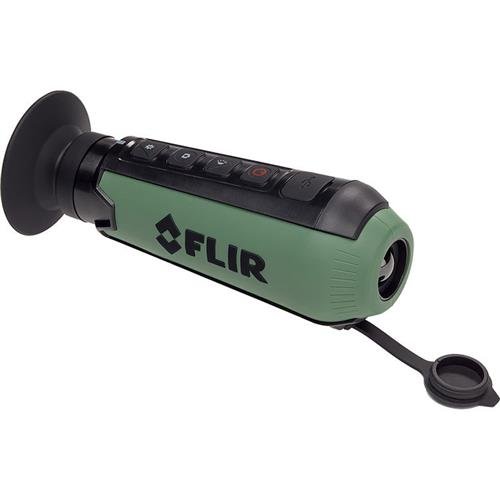 If you’re looking to get a thermal monocular but can’t see yourself spending more than $1000 to get a top-of-the-line model, then the FLIR Scout TK Pocket-Sized is the bargain model for you. This model comes with features that you would only expect on more expensive models, including a waterproof case that’s so good that you can fully submerge the monocular without damaging it. It also comes with a minimum focus distance of six inches, which is great for when things are close to you, but you can’t see them in the dark.

This model has a rechargeable battery, which lowers the cost of operation long-term. However, it can only see out to about 100 yards, which is good enough, but not great. Likewise, the resolution is merely average. It’s still good enough to see most things, but you’d get more detail on a more expensive model. Overall, this is a model packed with great features, but available at a much lower price point than most thermal monoculars, making it an exceptional value. 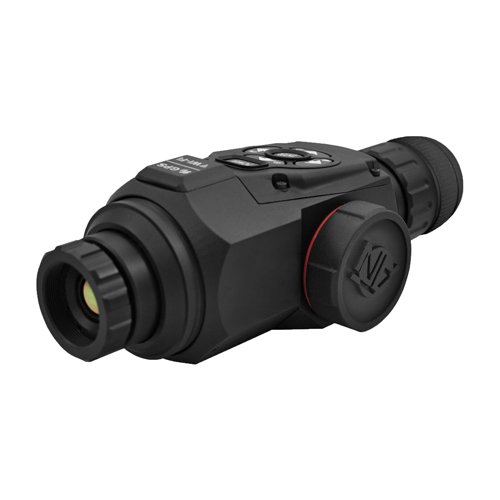 The ATN OTS-HD 384 TIMNOH381A is an expensive mess of a thermal monocular. It comes loaded with extra features that you may or may not use. There’s a rangefinder, a compass, a 3D gyroscopic image stabilization, a digital zoom system, high-resolution video recording, and the option to stream over wi-fi. Those are the features that you’d expect a thermal monocular to have to justify a price tag this large.

However, there’s one huge problem that plagues this model. It burns through batteries far too quickly. All of those extra features result in a portable device that can’t stay on for as long as competing models, making it a nice toy, but not well-suited to overnight hunting trips. This model is an example of trying to pack too much into a single device, and perfectly exemplifies how that strategy can result in low-quality final products. Overall, you’d have to spend a lot of money to get this model, and it’s just not worth it given its severe battery issues. 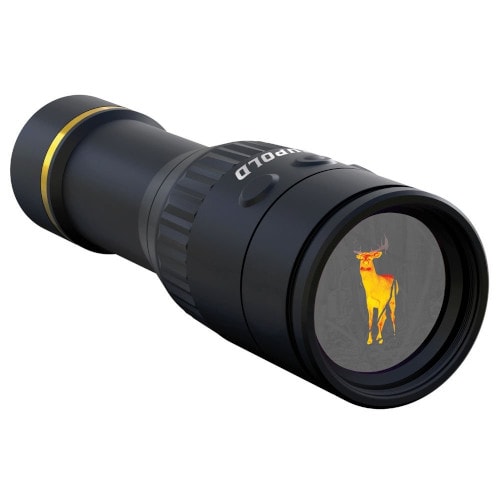 The best thing about the Leupold LUE-172830 LTO is that it won’t cost you an arm and a leg. However, like many cheap models in a field that is generally very expensive, it has more downsides than positives. It has poor resolution relative to most of its peers at only 240 x 204, which means that it’s going to be more difficult to figure out what things are. It also has poor digital zoom, which isn’t uncommon among thermal monoculars, but seems pronounced on this model.

The worst thing about this model is that it is only most effective out to 40 yards, and then minimally effective out to 100 yards. You’re not going to be able to see anything beyond that range. While it is waterproof, that’s something that doesn’t add a lot of value to a model that doesn’t work very well. Overall, you could spend less money on a different model on our list and get a much better pair of thermal monoculars.

We hope that our reviews have already given you some idea of what makes for good thermal monoculars. If you’re still not sure which model is right for you, then check out this buyer’s guide which highlights some of the thinking that went into our reviews and contains a lot of good general information about thermal monoculars.

Resolution is a feature that you may find a bit confusing if you’ve never shopped for a thermal monocular before. There are two different resolutions that you must consider before you make your decision, and the people who write product descriptions have a habit of using them interchangeably. The first resolution is representing how sensitive a camera is to the thermal environment. This number will likely seem small to you, but a good thermal monocular has a thermal resolution of at least 320 x 240 pixels. That means that the monocular is sensing more than 76,000 different points for their ambient thermal radiation.

The higher your thermal resolution, the more sensitive the thermal monocular. The extra pixels will show you more detail in the same area relative to a less-sensitive model, or show you the same amount of detail, but over a much larger area.

Battery life is one of those features that you can’t ignore if you’re going to be taking your monocular out into the field. Like most devices, the more features that you add to a thermal monocular, the less time its battery will last. While you’re unlikely to find a model that can last for 12 hours at a time without a recharge, you can find models that will last for 5 or 6 hours of operation.

If you value long battery life, you’re probably going to have to sacrifice features that you may or may not have used. Compasses, rangefinders, and image stabilization software all eat a lot of power but don’t provide a lot of use to many people or can be found separately on other devices.

You’ll also want to stay away from devices that use AA batteries, since those batteries are relatively expensive, and you’ll burn through them quickly.

Thermal monoculars that can record give you the option of saving the video you see to share it with family or friends or to use it for business purposes. Video recording does drain the battery faster, so if you don’t need the feature, it’s a good one to skip.

Most thermal monoculars that can record require you to supply your SD card to save video. That’s an extra expense that you have to consider over the price of the monocular. Some companies also include free software for editing the thermal videos that you take, which is a nice touch, but certainly not a deal-breaker.

Which thermal monocular is right for you?

The most important thing you can do before you purchase a thermal monocular is to figure out what your needs are. Start by thinking about what you’re going to be doing when you use the device, and then think about how your dream device would function in those scenarios.

Many people shop by looking only at price and features, hoping that finds them the best value, but they often end up disappointed because they don’t have features they need or spent too much money on features they won’t use. If you can find the device that closely matches your needs, then you’ve already found the model with the best value, and the one that will be the most satisfying to use in the long run.

Other types of monoculars worth considering:

The P2M Firestorm 1-4×19 is our top choice for thermal monoculars, coming with a great resolution and an extraordinarily-long detection range. The Pulsar Quantum Lite Thermal has a great startup time and multiple great viewing modes but falls to second on our list due to its use of AA batteries. The FLIR Scout TK Pocket-Sized is a great bargain model but is also waterproof and includes a rechargeable battery for a low cost of operation. The ATN OTS-HD 384 TIMNOH381A is expensive and comes with a lot of features but has extremely poor battery life. The Leupold LUE-172830 LTO is inexpensive but has poor resolution, poor zooming, and a subpar range, which drop it to last on our list.

Hopefully, our reviews have helped you understand what makes for a good-value thermal monocular. You should be able to use that information to find the model that is the best investment for your money.