Binoculars—a good old component of every birder’s kit. Because birds are mobile and tend to dislike having their safe space intruded on by the curious, binoculars played a vital role in helping amateur bird-watchers.

Times have changed, and so has a birder’s standard kit. Binoculars are still a staple, but they’re now just one option in bird-watching optics. A growing number of people are choosing the much more mobile and compact monocular. Like a pair of old, trusty binoculars, they can hang around your neck for fast access. They’re half the size, so if you have just a few seconds to get close to that tufted titmouse you’ve been stalking, that can make all the difference.

We took a look at a handful of monoculars for birding and wrote reviews of them. We hope you find them useful. If you get to the end and want a little more, we also put together a buyer’s guide to help you think about how to select a monocular for birding. We wish you the best of luck in logging a lot of new bird species and hope that our advice helped you do it.

It wasn’t really all that hard to give the Bushnell Legend our top pick for birding monoculars. This one really is the Cadillac of the competition, outclassing the other monoculars in just about every department. Except for one, which is price. In this case, you’re also paying for a Cadillac. If you take birding seriously, you’ll want the Cadillac.

The Legend comes with the kind of high-grade optics common to quality spotting scopes intended for long ranges. It’s got low-dispersion glass and multi-coated optics, and the BAK-4 prism is phase coated. All of these are designed to reduce blurs, distortions, and color aberrations common to high magnifications at long ranges. Bushnell puts them into a monocular for birding and made the entire thing waterproof so water wouldn’t seep in and ruin the image. It is the cream of the crop.

It’s a little bulky as a monocular but, more than that, you will pay for that quality. But, you probably figured that. 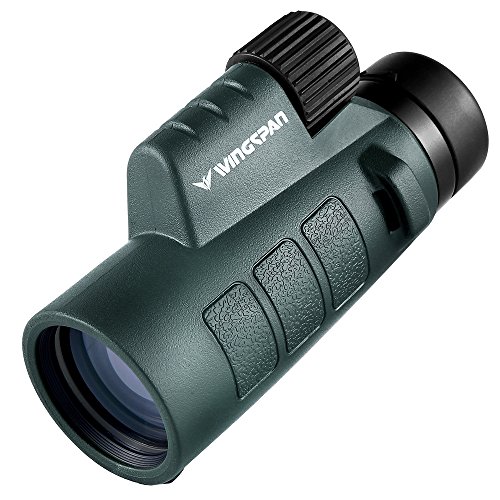 Wingspan’s Optics Outdoorsman is a great value monocular for birding. It delivers a nice, sharp image in a durable frame at a cost that makes it a good investment for any budget. Without question, it’s our “best for the money” birding monocular.

We like its portability and the ease with which you can focus it with one hand. It’s not a lightning fast focus, but a focus that lets you get the job done properly. There’s less futzing around with it than a traditional pair of binoculars. It won’t deliver the crispness of the Bushnell, but if you want to know the kind of woodpecker you’re seeing, it’ll get you the right kind of image for an identification.

It’s a bit bulky for a monocular, which is undesirable for a highly portable optic unit. We also felt like the lens cap was, oh, not all that well designed. For what you’re paying, however, it’s a great value. 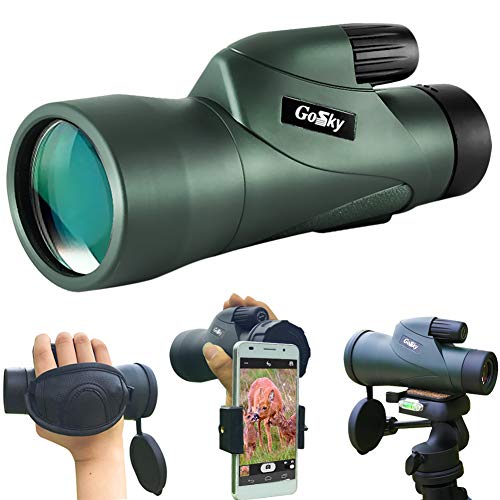 Don’t let its ranking fool you. Gosky’s 12×55 monocular is a good tool for birding. It just lacks the Bushnell’s high-end optics and the Wingspan’s value as a purchase. And, someone has to be in the bottom ranking, right?

The Gosky is a durable monocular with a large objective lens that captures a lot of light. That makes it a little better in low-light conditions (the Bushnell compensates with vastly superior optics).

What we didn’t like was that it’s a bit overpriced for what it delivers. You can get similar quality for much less money. It’s also a little underpowered compared to its competitors. This monocular can get you a nice, crisp image but it can’t quite do it at the range you might like.

You’ve read our reviews. Though you feel like there’s some wisdom to be gleaned from them, you probably prefer to think of them as the beginning of an inquiry rather than the entire inquiry. You want to learn how to think, not be told what to think. That’s a really smart approach, and we support you in it.

We put together a short buyer’s guide based on our review criteria. We hope that you can use the information in it to choose the right monocular for your birding kit.

We don’t normally advise you to start with setting a budget, but in the case of a birding monocular, you can do that. If you’re using a monocular, unlike a spotting scope that has you looking at objects far away using high magnifications, you’ve opted for mobility over range. You can still pay for all the features that you would need to make buying a scope worthwhile, but you can also go light on these because you don’t have to worry so much about getting a crisp image from several hundred yards away. Figure out how much you want to spend, but be willing to adjust. That is, know what you want a monocular for and spend accordingly.

If you’re going to use it primarily in low-light conditions, maybe at dusk to watch owls, you’ll want a monocular with a larger lens. That’ll make it larger and a bit clumsier to use, but the big lens will also gather in more light and account for the dim environment.

Wet environments mean you should look to monoculars that are water- and fog-resistant. You really want an optics chamber sealed off from environmental conditions. If the air around you is dry, that’s less important, but condensation is a real issue if you drop it in a stream and water gets inside it.

Some of the features that help reduce glare, blur, and distortion at really long ranges aren’t such a big deal at shorter range, but birding requires that you observe details. So, you’ll want features that help enhance the sharpness of the final image. That would include things like coated lenses and a prism.

Coated lenses help reduce light lost to reflected waves. This will help images come out sharper and more colorful. There is a range of different kinds of coatings from single coats to multiple-layer coatings. Generally speaking, the more coats the higher the quality of the image.

The entire point of using a monocular is that it’s more compact and easier to use than the alternatives, so size will necessarily play a role in choosing which one is right for you. Find one that is easy to hold and move into place with your hands, but isn’t a burden to wear around your neck while moving.

How do you choose the right monocular for backpacking?

How small can pocket monoculars actually get?

Bushnell’s Legend was far and away our favorite monocular for birding in our reviews. The optics are top-of-the-line and deliver sharp, colorful images under all kinds of conditions. It’s the Cadillac of birding monoculars, and that also means paying for it. The Wingspan Optics Outdoorsman was our “Best for the Money” choice. It does the most for the amount of money you pay for it. Considering how much it costs, it’s quite the bargain. The Gosky is a good birding monocular, but overpriced considering its quality and limited power.

We hope you enjoyed our reviews and found them useful. If you go on looking for your birding monocular, we hope our buyer’s guide provided a lot of meat to chew over in your search. We wish you the best of luck in your purchase and lots of happy memories as you go out logging new and interesting species.