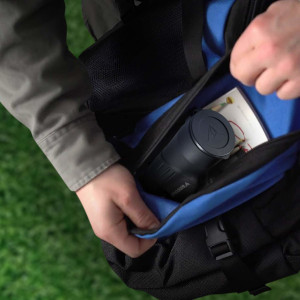 You may think that you need a pair of large, bulky, expensive binoculars to make the most out of the great outdoors while you’re out backpacking or hiking. And while those aren’t a bad idea, you can get much of the same experience out of a compact, lightweight monocular that won’t hurt your wallet nearly as badly. 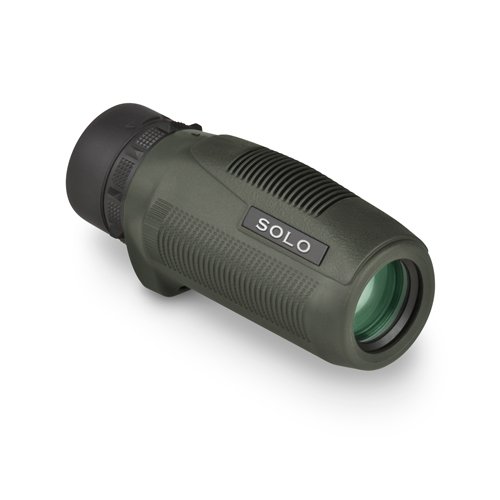 The Vortex Optics Solo 800903 weighs less than a pound which makes it great for your next backpacking trip, where every ounce matters. It comes with a rubber coating that will protect it from the bumps that it will experience inside a backpack, or from the occasional accidental drop. It also comes with a utility clip, which will let you hang it from your belt or pocket so that you have easy access to it while you hike, for those fleeting moments where you spot something off in the distance.

It’s also waterproof and fogproof, which is a nice touch on a monocular this small. While it does have a stiff focus ring that can sometimes be hard to adjust, it does seem to break in over time and become easier to use. While the 8×25 optics are nothing to write home about, they’re good enough for a model this portable. Overall, this monocular makes an excellent choice for most people who are looking for a small, light monocular to take on their next excursion into nature. 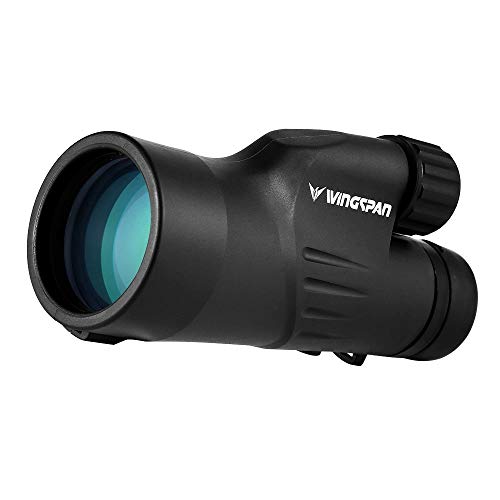 The Wingspan Optics Titan 12×50 comes in second on our list. It’s compact, but not quite as compact as the previous model on our list. However, it has superior optics, coming with 12x magnification and a 50-millimeter lens, which is not as large as monocular lenses go, but massive for a compact, lightweight model such as this one. While this model weighs a bit more than the last one, it is still less than a pound, which gives it much of the same portability.

It’s waterproof and fogproof, which make it safe to take out into the great outdoors, and it has a good rubber coating that keeps it safe from many kinds of incidental damage. The one knock on this model is that it comes with an underwhelming field of view. This is related to the excellent power, as larger levels of magnification result in smaller fields of view, but large lenses help counteract that. Still, it’s a disappointing flaw. Overall, this model will be a good choice for many people, but you can get a better deal with the above or following model. 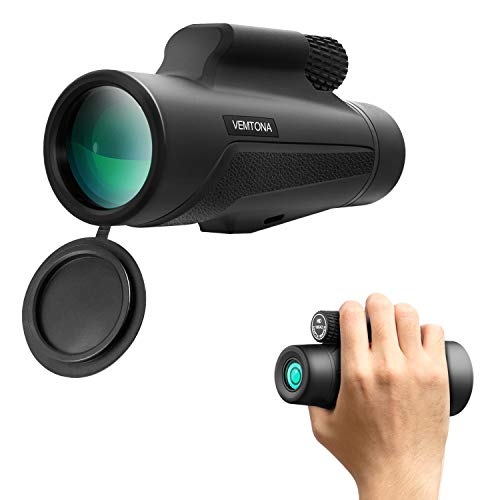 The VEMTONA 10×42 Monocular features a very cool concept, with an included bracket that allows you to attach your smartphone and use it either as a viewing screen or as a camera to take pictures or record videos. It comes with great, clear 10×42 optics that produce a clear, bright image, which strikes a nice balance between size and power. A 42-millimeter lens isn’t the largest on the market, but it feels about right for a monocular of this size.

The focusing wheel is positioned perfectly for using this monocular with one hand, which is a feature you don’t find on all monoculars. The only real problem with this model is that the phone attachment won’t work with newer, wider phones, so if you own one of those you’re out of luck. However, this model is otherwise a great deal, and since you can get it for significantly less than the other models on this list, it’s easily the best value monocular.

We hope that our reviews have already given you some idea about what you should be looking for when shopping for your next monocular. While no one model is going to be right for everyone, there are certain features that everyone should be looking for, and that most people won’t’ be able to live without. In this buyer’s guide, we’ll alert you to some features that you should always consider and show you some of the thinking that went into our reviews.

The optics are easily the most important feature of a monocular. If they aren’t good, then the monocular has very little value. Likewise, excellent optics can offset some glaring flaws. One of the best ways to identify the quality of the optics in a monocular is to look for a pair of numbers that is used to describe every model. For example, it might look like this, “8×30.” In this example, “8” represents the monocular’s magnification, which is often called “power” by people in the industry, even though no batteries are required. So, in this case, the monocular would have 8x magnification.

The number after the “x” represents the lens diameter in millimeters. In this example, it would have a 30-millimeter lens, which isn’t that large. You generally want a bigger lens in monoculars as it lets in more light and helps produce clearer images. It also creates a wider field of view, which can be extra useful when you’re using a monocular with a higher power.

You’ll also want to get a waterproof and fog proof model, as any water that gets into the monocular will likely settle on the mirrors, which makes the monocular unusable.

A monocular’s shell is also very important. It heavily impacts the weight of the device, which means that a superior shell can be durable, protective, but also lightweight. The best shells have some sort of rubber coating on them that makes them easier to hold in humid or outright rainy conditions. Rubberized coatings also cushion the impact if you drop the monocular, so it’s a good investment all around.

Plastic-shelled monoculars are generally better to avoid, since they get slick in wet conditions, and are prone to cracking under even gentle pressures. Metal shells are a significant improvement over plastic ones when it comes to durability, but they a significant amount of weight and also get very slick in the wet conditions.

Textured metal shells strike a balance between rubber-coated and raw-metal shells, as they’re durable and heavy, but they are also far easier to grip than raw-metal or plastic, and come just behind the rubber shells in that category.

Some of our other monocular guides:

The Vortex Optics Solo 800903 is our top model, coming with a great rubber coating and utility clip, as well as a lightweight, but waterproof and fog proof shell. The Wingspan Optics Titan 12×50 comes with the best optics on our list, but still maintains a small, waterproof and fog proof form, kept only out of first due to its narrow field of view. The VEMTONA 10×42 Monocular includes a great phone adaptor, and since it’s the cheapest model on our list, it’s also the best value.

Thanks for reading our reviews. We hope that they have helped you understand what you should be looking for when you shop for a new monocular. With this information, you should be able to find the right model for you at a price you’ll love.

Related reads: How do you choose the right monocular for your needs?