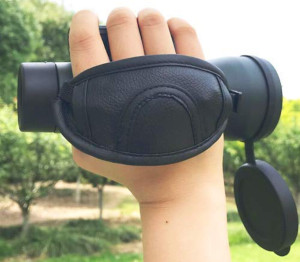 If you want a device that helps you see long distances but don’t want a bulky one that takes up a lot of space and is heavy and difficult to cart around, you need a handheld telescope. It can be difficult to find what you’re looking for if you’re shopping online. There are lots of choices to sort through, and comparing all of them can feel like an impossible task.

Our reviews of handheld telescopes are meant to make the shopping experience easier. They break each one down, so you know exactly what you’re getting before buying. There’s also a buyer’s guide, which has all the information you need to know about handheld telescopes, so you can invest in a great one.

Comparison of our Favorite Picks in 2021 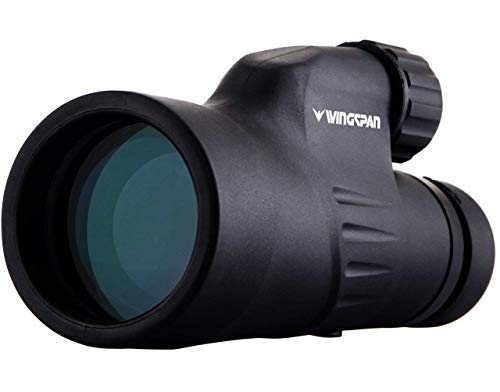 The Wingspan Optics Titan 12X50 is the best overall handheld telescope available. It has 12x magnification, comparable to some of the best binoculars, and that means you have enough magnification to do basic stargazing. 12x is also generally considered to be the maximum magnification you can have before unsteady hands become a problem, so this is the best magnification possible in a portable frame. It’s also waterproof and fogproof, so it’s safe to use in wet or humid conditions.

It weighs just 1.1 pounds. That makes it light enough to carry around all day or to throw in a pack without any issues. If you’re looking for a scope with a good mix of image quality and portability, this is one to consider. This model also has a reputation for producing bright images, which makes seeing things at long distances easier. Plus, brighter telescopes allow you to see more at dawn and dusk and make stargazing easier. Our one complaint is that the optical quality could be higher and the images sharper. However, for the money, it would be hard to find a handheld telescope that provides a better experience. 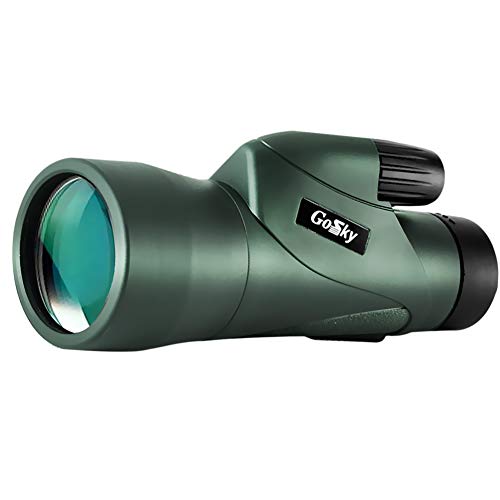 The Gosky 12×55 High Definition Monocular Mini Telescope has many features that handheld telescope users will love. It offers 12x magnification, which is at the upper limit of what you can use comfortably without a tripod or other mounting device. That great magnification allows you to make out great detail, and the large lens lets in plenty of light for a bright image and large field of view. This telescope has long eye relief, so if you use glasses, you won’t have to remove them. It’s also fogproof and waterproof, so you won’t have to worry about it getting waterlogged if you get caught in a sudden shower.

What really sets this scope apart, however, is its inclusion of a smartphone adapter. With that part attached, you’ll be able to connect most kinds of smartphones and allow multiple people to see through this telescope at once using the smartphone’s screen, or even record video. What keeps it out of the top spot is that it has trouble staying in focus, requiring constant adjustment on your part. Still, if you’re looking for a telescope with a smartphone adapter, this model will do just fine. 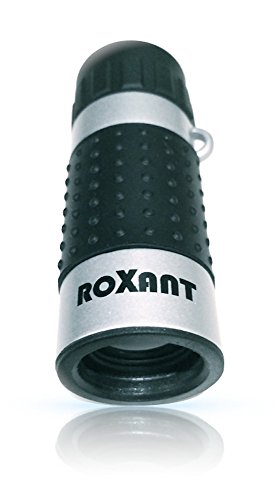 The ROXANT Grip Scope (Pocket Telescope) is one of the smallest handheld telescopes on our list, but you shouldn’t count it out just yet. At 5.5 inches long and two inches in diameter, it’s small enough to put in a pocket or slip into just about any bag for transportation. The no-slip grip is useful when it’s wet outside, and also generally makes it harder to drop this telescope by accident. The adjustable eyecup allows you to use the telescope with or without glasses, or to adjust the scope to your preferred level of eye relief.

One of the reasons we really love this handheld telescope is its great price. You can get it for about half of what you’d pay for the top options on our list. If you’re looking for a great deal, look no further than this model. While we’d like to rank it higher, we can’t, since it only has 6x magnification. While that’s enough for some activities, it won’t be enough to satisfy all users. Still, for the price, this telescope is an incredible deal that few people should skip. 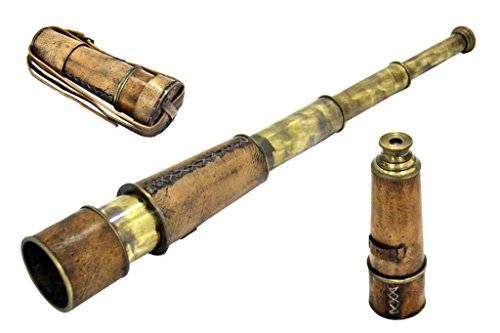 If you want a traditional telescope that will add a sense of authenticity to your explorations, the NAUTICALMART Brass Nautical Antique Spyglass Telescope may be the handheld telescope for you. This is easily the best spyglass telescope on the market, and that fact just begins with its great, traditional look. This telescope really works and provides up to 10x magnification, which is more than enough for most kinds of visual examination. It also comes with an adjustable sunshade, originally designed to cut out the sun’s reflection in the water on the high seas.

However, it’s not the best handheld telescope out there. For one, it can be tricky to adjust the focus. There’s no knob or ring you twist to bring the lenses into alignment. Instead, you have to adjust the length of the telescope, which can be tricky. While this model is very inexpensive, it does suffer from a relatively cheap exterior. If you drop it on a hard surface, it’s probably doomed. However, if you want a telescope that will look great and get the job done, this is a strong contender, even if it’s not going to make everyone happy. 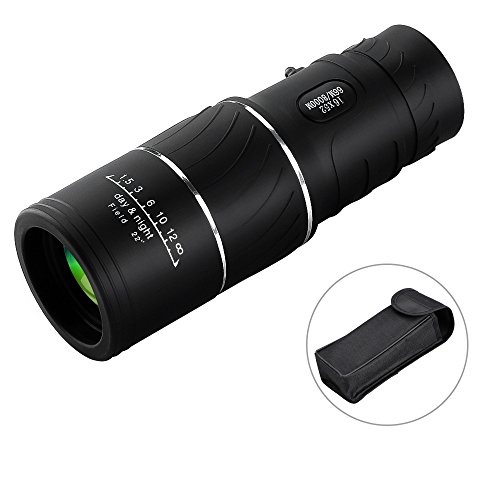 The ARCHEER 16×52 Monocular Dual Focus Optics Zoom Telescope boasts large magnification, but it doesn’t quite live up to its promises in other areas. It does have 16x magnification, which makes it the most powerful handheld telescope on our list. It also has diopter adjustment, so you can change the focal range to rest on your face, hold it away, or use it with or without glasses. Its large, 52mm lens is by far the largest one here, letting in a ton of light.

This model’s price is the lowest on our list, so, unsurprisingly, it has some serious downsides. This telescope’s clarity is quite poor, which suggests that the manufacturer is using subpar glass and lens coatings. It can also be very tricky to focus. At one end, you have to set the diopter, while also changing the focal length at the front of the device. It can be hard to tell which one you need to change to bring an image into focus, which frustrates many users. This telescope is good in theory, but it will leave many displeased.

One of the most important things to understand about handheld telescopes is magnification. On devices like binoculars, monoculars, and telescopes, the magnification is typically represented by a number followed by an “x.” A device with“12x” magnification makes the thing you’re looking at appear 12 times larger.

Most people find that 12x magnification is the most they want in a handheld device. If you go beyond that magnification, you’ll probably want a tripod or other stabilization device, as the natural shaking of your hands can cause a very unstable image. At the other extreme, most people prefer having at least 8x magnification, as it’s enough to feel like you’re getting significant magnification.

Lens size is also very important. Some devices show lens size by displaying it immediately after the magnification. A “12×30” model would have 12x magnification and a lens that was 30 millimeters across.

As a general rule of thumb, the bigger the lens gets, the clearer the image gets. Bigger lenses also let in more light, which leads to a brighter image. That makes scopes with larger lenses more useful at dawn and dusk when light isn’t as strong. It also makes them more useful for stargazing.

While you can get handheld telescopes in a range of lens sizes, you’ll most likely want something with at least a 30-millimeter lens and no more than a 50-millimeter lens for a good combination of portability and image quality.

Portability is more than having a small telescope. Of course, smaller can be better, but for a device to truly be portable, it needs to do more than just be small.

For example, if you’re planning to use a telescope outdoors, you’ll want one that’s waterproof and fogproof. If it’s not, it will get fog on its optics and become unusable, or worse, become waterlogged, which can be a hard problem to fix.

You’ll also want a shockproof model. Accidents happen, and you don’t want to have to replace your handheld telescope if you drop it. If it’s not shockproof, even small drops can lead to it breaking.

Towards that end, it’s a good idea to get a telescope with a no-slip cover, as it will be easier to grip. That goes double if you think you’ll be in a humid situation, or get caught in a rainstorm, as a no-slip cover works wonders in those situations.

The Wingspan Optics Titan 12X50 is our favorite handheld telescope due to its 12x magnification, lightweight, and bright images. Next is the Gosky 12×55 High Definition Monocular Mini Telescope, which also has 12x magnification. It comes with long eye relief and a smartphone adapter, though the ease with which it loses focus keeps it out of first place. In third is the ROXANT Grip Scope (Pocket Telescope), which features a no-slip grip, slender frame, and adjustable eyecup. Its very low price makes it the best value on our list.

The fourth place belongs to the NAUTICALMART Brass Nautical Antique Spyglass Telescope. It has a great traditional look, 10x magnification, and a sunshade, but suffers from poor durability and tricky focusing. The ARCHEER 16×52 Monocular Dual Focus Optics Zoom Telescope has the best magnification on our list at 16x and also includes diopter adjustment and a large lens. Underwhelming clarity and tricky focusing mean that it falls to the bottom of our list.

We hope these reviews and buyer’s guide have helped you learn about handheld telescopes and have led you to one that will last for a long time.