20 Types of Ducks Found in Oklahoma (with Pictures) 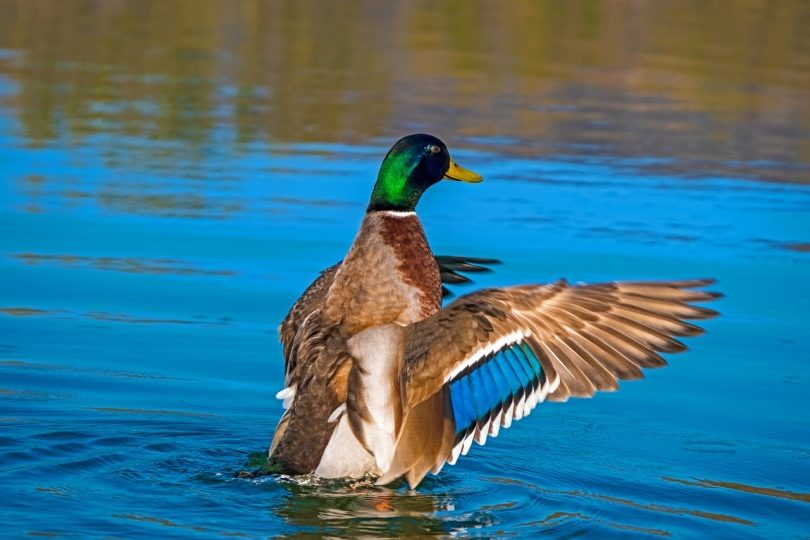 Knowing what types of wildlife inhabit your state is great knowledge to have. For those that do not know much about ducks, surprisingly, many varieties can be observed. In Oklahoma, you can expect different kinds of ducks to show up in the state according to migratory habits.

Ducks can generally be divided into two different categories: dabbling ducks and diving ducks. The categorization is based on how they obtain their food. Dabblers stick to food on or just below the surface, while Diver’s forage for food within the water and sometimes down to the bottom.

We have separated our list into different categories and provided some extra information on the breeds of duck you can find in Oklahoma.

The 20 Duck Breeds Found in Oklahoma

Primarily found in Oklahoma during the wintertime, these compact little ducks have round heads and short blueish gray bills with black tips. Males are mostly brown with a white crown and a green band behind their eyes. Females are all brown with gray heads.

They are a shy species that prefer quieter places away from humans. They eat much more vegetation than other ducks and their short bills are well equipped for it. They can be found foraging through fields, which is uncommon among other duck species. Otherwise, you can typically find them in rural, quiet marshes and lakes.

Blue-winged teal ducks are the second most common duck in North America and make their way through Oklahoma during the migration period. They are typically found in the shallow wetlands across the state. This species is popular among hunters, but regulations are in place to preserve their population.

Males have blue heads with a white band in front of the eyes with a black bill and black wings. Females have brown bodies with a crown on the head and dark lines around the eyes. This species has a distinct blue shoulder patch that is only visible during flight.

The cinnamon teal duck is found in larger prominent wetlands in Oklahoma during their migration period. While their population is still at healthy numbers, it has been on the decline for the last 50 years.

Cinnamon teal males have a cinnamon-colored body, hence the name, with a long, thick black bill and red eyes. They display blue and green patches on their wings while in flight. Females are a mottled brown color with black eyes and black bills.

Gadwalls are commonly found near quiet ponds with lots of vegetation. They spend their time in Oklahoma during the non-breeding season and are not as popular since they don’t have the standout coloration that most male ducks possess.

Males are patterned with gray, brown, and black and have brown heads with dark bills. Females resemble mallards with their mottled brown coloration and bill that ranges from dark orange to black.

The green-winged teal is the smallest dabbling duck that will be found in Oklahoma and frequent the state during the nonbreeding season. These ducks are often seen with other species. Green-winged teals are the second most hunted duck in the United States.

Males have chestnut-brown heads with a distinct green patch on the ears. Their bodies are gray with vertical white stripes on the side. Females are mottled brown with dark-lined eyes. Both have a green patch on the wings that are visible during flight.

Mallards are the most common species of duck in Oklahoma and are found year-round. This species is highly adaptable and is found in a variety of wetlands. They are more comfortable around humans than some other species, so you are more likely to run into them. Some migratory mallards come into the state as well.

Males have a yellow bill, dark reddish-brown chest with a black rump and white tip on the tail. They are known for their distinctive bright green head with a white collar. Females have mottled brown coloration all over their bodies and will have brown or orange bills. Both males and females have bluish-purple feathering underneath the wing that is only seen during flight.

Northern pintails are commonly found in the shallows near the edges of lakes and ponds. They are not too keen on humans and like to stay far away from people. These ducks frequent Oklahoma in their nonbreeding season and are found foraging the land more than some other species.

Northern pintails are easily recognizable by their pointy tail and distinct large, wide bills. They are slender ducks with long necks and long tails. Mails have a cinnamon-brown coloration on the head with gray bodies and white breasts and throats. Females have tan heads and brown plumage.

Known for their extremely large, spoon-shaped bill that’s made for shoveling through mud and sand, the northern shoveler visits Oklahoma during the colder months after migrating south after the breeding season. The males have green heads, white chests, and reddish-brown body coloration with black backs and yellow eyes. The females are brown with an occasional blue patch on the shoulder.

Wood ducks are a distinct little species and are one of the very few you will find in trees. They gravitate toward tree cavities for nesting. These ducks can be found in most of Oklahoma throughout the year.

They are of very interesting color and plumage. Males are distinguishable by their green crested head, red eyes, and chestnut-colored breast. Females have brown bodies with gray heads that also exhibit a slight crest. They have a blue patch on the wing and a teardrop-shaped white eye patch.

The bufflehead are small ducks with larger heads and a unique appearance. Males have dark backs, white chests, and iridescent purple to green plumage on their heads. Females are mostly brown with a dark head and white cheek patch.

These ducks forage underwater and are found in Oklahoma during the winter months. They spend most of their time foraging underwater for food.

The canvasbacks are large diving ducks with black breasts and tails and a pale gray body. Males are identified by their red eyes and reddish-brown heads. Females are duller in color with black eyes and brown heads.

The canvasback makes its way through Oklahoma during the nonbreeding winter season. They can dive up to 7 feet when foraging for food and are rarely ever seen on dry land.

Common goldeneyes can stay underwater for up to a minute in search of food. They spend the breeding season in Canada and migrate south to states like Oklahoma during the non-breeding months.

Males have a dark green head, bright yellow eyes, and a white cheek patch. Their body is mostly white with a black back and rump. The female common goldeneye has brown heads, a short dark bill with a yellow tip at the end, and pale-yellow eyes.

The common merganser is a large duck that has a long, slender orange bill with a black tip and dark eyes. They are frequently found in rivers and lakes near heavily forested areas. They are not as common to see in Oklahoma and rarely ever make it down to the southeast portion of the state.

They are recognizable due to their thin beaks. Males have a mostly white body with a black back and a green head. Females have cinnamon-colored heads with grayish-white bodies.

The greater scaup is a mid-sized diving duck that spends the summer months up north in Alaska and Canada for breeding. They make their way south into states like Oklahoma when the weather gets colder up north.

Males have yellow eyes, a green head, and dark chests. Females have a chocolatey-brown head and a brown body. Both males and females have large blue-grey bills with black tips

Found in Oklahoma during the non-breeding colder season, the small hooded merganser males have a distinct large black crest with a large white patch on each side and yellow eyes. Females are brown with dark eyes but still sport the cred though it is lighter in color.

These ducks are found year-round in most of the Midwest and the eastern United States. They hunt underwater by using their keen eyesight and diving abilities.

Lesser scaups are a very abundant species in the United States but are much rarer to find in Oklahoma, only making their way through the state during the wintertime. Males have yellow eyes, a glossy black head. Females are dark brown with an even darker head and white patch by the bill. These ducks are divers that are well known for being quiet.

Feasting primarily on fish, these slim ducks have long bodies and a very thin bill. Males have a dark green head and spiked crest while the females are grayish brown in overall coloration. The red-breasted merganser can dive up to 250 times per day in search of food.

These ducks are typically seen in the United States during migration and are not commonly hunted species.

In Oklahoma, you may come across the redhead duck during the winter months. These are social ducks that tend to gather in very large flocks and frequent larger lakes. They are popular species for hunters that tend to take well to their decoys.

Males have a very distinct red head and yellow eyes with a gray body and black chest. Females are brown with paler-colored faces and dark eyes. Don’t be surprised if you see gatherings of thousands of redhead ducks, they are one of the few species that come together like this.

Ring-necked ducks are medium-sized ducks with peaked heads. Males and females have gray bills with a white band with a black tip. Males will have glossy black heads and chests with gray sides and yellow eyes. The females are brown with gray faces and dark eyes.

These ducks are commonly seen in shallow ponds and wetlands in Oklahoma, these ducks are found in flocks during the non-breeding season, which is when they frequent the state.

The ruddy duck is probably the most distinct duck that you will ever find in Oklahoma. The males have distinct bright blue bills with white cheeks and a black cap. Females are soft brown with a dark cap.

Ruddy ducks are wonderful swimmers and will prefer to dive to escape a predatory rather than fly. These guys frequent Oklahoma in the nonbreeding season when the north reaches extreme cold temperatures.

There is no shortage of duck species that can be found in the state of Oklahoma. As you can see, both the dabbling ducks and the diving ducks tend to frequent the sooner state during the cold, non-breeding seasons as they make their way south for the winter.

While many more ducks make their way through the Sooner State during migration, these 20 are the most common.

About the Author Luxifa Le

Luxifa is a freelance writer with a passion for animal science and technology. She loves to share the world of animal science with people to help them make informed decisions for themselves and their pets. Knowledge is power and she loves to help everyone become the most informed they can be.

18 Types of Black Birds in North Carolina (With Pictures)

Are Swans Aggressive? Is It True They Can Break Bones?

17 Types of Black Birds in Canada (With Pictures)

3 Types of Starlings (With Pictures)

10 Types of Blackbirds in Australia (With Pictures)

14 Types of Black Birds in Tennessee (with Pictures)

Are Starlings Invasive? Are They Native to America?