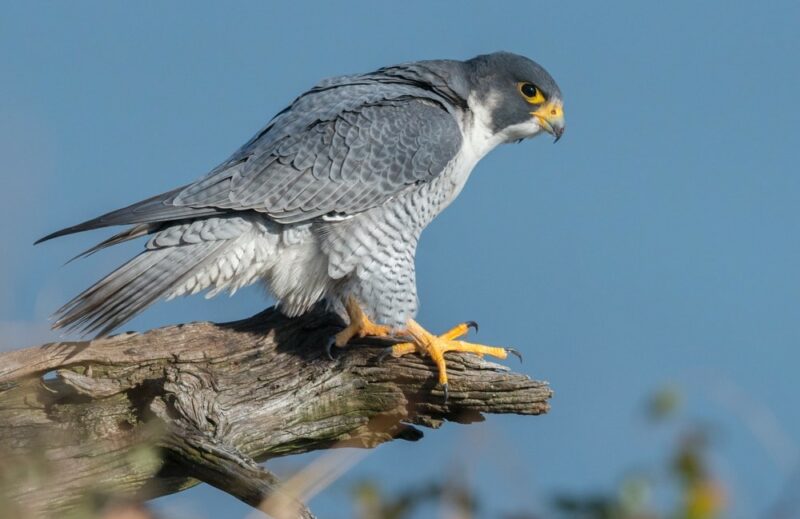 The peregrine falcon is a large bird of prey with a dark gray coat and head, contrasted with a cream-white breast and throat. Sharp yellow talons and a hooked beak give this species an intimidating look, and they are a common member of the falcon family.

This bird has been found on every continent except for Antarctica, with great prominence in North America. The range of the peregrine falcon spans from the coastal edges of Greenland for mating to their non-breeding grounds down in the southernmost point in Mexico. It migrates through the vast majority of the United States, but it may be seen living throughout the year on the northeastern coast or along the Pacific.

Peregrine falcons often live in coastal towns or ocean shorelines. However, they do stake out their territory in deserts, which primarily reside in the American southwest.

In terms of their hunting habits, these falcons are excellent in the art of aerial diving. They can fly nearly 70 miles per hour to pursue their prey!

As birds of prey, falcons are always on the search for smaller and medium birds, such as sparrows or finches. But they also have a taste for rodents that can be found both in the wild and in the city.

Similar to other falcon species, the peregrine chooses to nest up high on cliff sides and rocky terrain. Their nests are about 9 inches in diameter and approximately 2 inches deep. Peregrine falcons may also mate for life.

What to Listen For

The calls of peregrine falcons are mid-length screeches that elevate higher in tone. However, they do sound quite similar to other birds of prey.

What to Look For

Always be on the lookout for large, brushy nests lodged into tight spaces or even on telephone poles. Here, you may see a peregrine falcon swoop back and forth to feed its young. Keep an eye out for its yellow coloring near the eyes and feet; they’re the most eye-catching features on its body!

Peregrine falcons can be found throughout the day, but it will be difficult to see them at dusk or dawn due to their coloring. Therefore, daytime searches might be your best bet to find one.

Generally speaking, falcons do not come close to lawns or backyards unless there is an abundance of rodents and or medium-sized birds. Your only chance at attracting them would be to bring in multiple bird species that they can hunt. However, this isn’t advised as they could potentially target a small dog or cat instinctively.

In the 1900s, the peregrine falcon was losing a lot of its population in the eastern U.S., but the species has bounced back considerably since then. Now, it doesn’t have much threat in terms of its numbers. However, the climate shifts in the north are affecting migration patterns and will continue to do so in the future if this stays consistent.

Image By: A Quinn, Pixabay

Peregrine falcons are an incredible bird for birders and non-birders to get a glimpse of. Their gray coat and yellow highlights give them an iconic appearance, especially where they live near coastal towns. If you want to search for one yourself, make sure to listen for calls and check their habitat thoroughly. Good luck!

Blue Jay Eggs vs. Robin Eggs: How to Tell the Difference

Yellow Warbler vs. Goldfinch: How to Tell the Difference

Great Blue Heron Male vs. Female: How to Tell the Difference

10 Common Types of Sparrows in Maine (With Pictures)

12 DIY Wren Birdhouse Plans You Can Make Today! (With Pictures)