Do Juncos Migrate? What Do They Do in the Winter? 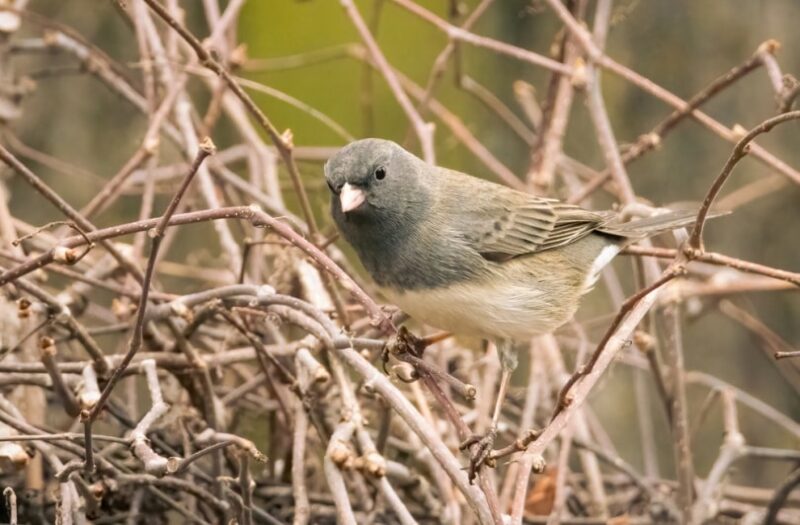 One of the most popular facts about birds is that they tend to migrate to the south for the winter. Why? Because many bird species simply don’t care for cold weather. Not only does it make it hard to find suitable food such as edible seeds, berries, and insects, but Northern and Eastern temperatures can be especially harsh – just like it is for humans. But do juncos (also known as “dark-eyed juncos”) migrate in the winter, or do they stay in their same habitat all year round? Find out in this article.

The short answer is yes, most Juncos migrate to warmer climates in the winter. However, Juncos living in places like the Appalachian Mountains may not migrate.

Do Juncos Migrate? To Where?

Yes. Most juncos that live in Alaska, Canada, and northern states such as Washington and Montana will migrate to southern states during the winter months. And depending on their location some will simply migrate to Midwestern states instead of making the flight all the way to the South.

However, juncos living in the Appalachian Mountains or in western states won’t migrate won’t at all. So to say, it really depends on the junco’s location and the availability of local food supplies.

Most juncos will migrate to warmer temperatures and southern parts of the United States for food availability and more suitable weather conditions. However, there are some juncos, such as those located in western states and near the Appalachian Mountains that will stay in the same location as long as there is food available and temperatures are somewhat moderate.

Do Magpies Like Stealing Shiny Things? The Surprising Answer!

Why Do Some Birds Have Webbed Feet? The Surprising Answer!

Why Do Some Birds Nest on The Ground? (4 Reasons for This Behavior)

How Much Weight Can a Hawk Carry? The Fascinating Answer!

How Much Weight Can a Vulture Carry? The Interesting Answer!

How Much Weight Can an Eagle Carry? The Fascinating Answer!

6 Types of Hummingbirds in Michigan (With Pictures)

11 Common Types of Sparrows in Ohio (With Pictures)